Democracy, If We Can Keep It: The Aclu's 100-Year Fight for Rights in America (Hardcover) 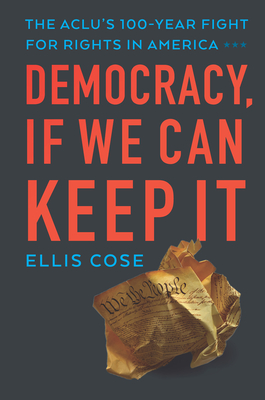 Published to coincide with the ACLU's centennial, a major new book by the nationally celebrated journalist and bestselling author

For a century, the American Civil Liberties Union has fought to keep Americans in touch with the founding values of the Constitution. As its centennial approached, the organization invited Ellis Cose to become its first ever writer-in-residence, with complete editorial independence.

The result is Cose's groundbreaking Democracy, If We Can Keep It: The ACLU's 100-Year Fight for Rights in America, the most authoritative account ever of America's premier defender of civil liberties. A vivid work of history and journalism, Democracy, If We Can Keep It is not just the definitive story of the ACLU but also an essential account of America's rediscovery of rights it had granted but long denied. Cose's narrative begins with World War I and brings us to today, chronicling the ACLU's role through the horrors of 9/11, the saga of Edward Snowden, and the phenomenon of Donald Trump.

A chronicle of America's most difficult ethical quandaries from the Red Scare, the Scottsboro Boys' trials, Japanese American internment, McCarthyism, and Vietnam, Democracy, If We Can Keep It weaves these accounts into a deeper story of American freedom--one that is profoundly relevant to our present moment.

Ellis Cose is a former columnist for Newsweek, chairman of the editorial board of the New York Daily News, contributor and critic for Time, and columnist for USA Today. The author of numerous books, including the bestselling The Rage of a Privileged Class, he lives in New York City.