America and the Great War: A Library of Congress Illustrated History (Hardcover) 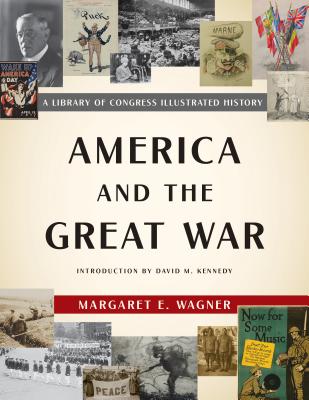 Choice Magazine Outstanding Academic Titles of the Year for 2017

"A uniquely colorful chronicle of this dramatic and convulsive chapter in American--and world--history. It's an epic tale, and here it is wondrously well told." --David M. Kennedy, Pulitzer Prize-winning historian and author of FREEDOM FROM FEAR

From August 1914 through March 1917, Americans were increasingly horrified at the unprecedented destruction of the First World War. While sending massive assistance to the conflict’s victims, most Americans opposed direct involvement. Their country was immersed in its own internal struggles, including attempts to curb the power of business monopolies, reform labor practices, secure proper treatment for millions of recent immigrants, and expand American democracy.

Yet from the first, the war deeply affected American emotions and the nation’s commercial, financial, and political interests. The menace from German U-boats and failure of U.S. attempts at mediation finally led to a declaration of war, signed by President Wilson on April 6, 1917.

America and the Great War commemorates the centennial of that turning point in American history. Chronicling the United States in neutrality and in conflict, it presents events and arguments, political and military battles, bitter tragedies and epic achievements that marked U.S. involvement in the first modern war. Drawing on the matchless resources of the Library of Congress, the book includes many eyewitness accounts and more than 250 color and black-and-white images, many never before published.

With an introduction by Pulitzer Prize–winning historian David M. Kennedy, America and the Great War brings to life the tempestuous era from which the United States emerged as a major world power.

David M. Kennedy is the Donald J. McLachlan Professor of History Emeritus at Stanford University. He is the author of Freedom from Fear: The American People in Depression and War, 1929–1945, which won the Pulitzer Prize for History. He lives in Palo Alto, California.

"Wagner . . . uses the library's visual and documentary resources to good effect in a work that combines an entertaining coffee-table format with an intellectually rewarding text." - Publishers Weekly

"A fresh, enlightening look at American society as it reluctantly worked its way into being a world power." - Kirkus Reviews

"America and the Great War is the sort of treatment that one might expect from a Ken Burns project, and fully equal to his tome on the Civil War." - The Sunday Republican

"America and the Great War draws on the incomparably rich holdings of the Library of Congress to offer a uniquely colorful chronicle of this dramatic and convulsive chapter in American--and world--history. It's an epic tale, and here it is wondrously well told." - David M. Kennedy, Pulitzer Prize-winning historian and author of FREEDOM FROM FEAR

"The First World War and its aftermath gave birth to the 20th century’s worst demons. This lively, capacious book is highly readable, and rightly reminds us that the American experience of that war was of repression at home as well as military triumph abroad." - Adam Hochschild, author of KING LEOPOLD'S GHOST and TO END ALL WARS

"World War One was a pivotal event in U.S. history. But, for too many Americans, it is a forgotten one. I hope Margaret Wagner's evocative and splendidly illustrated narrative will both revive its memory and nudge us towards rethinking the virtues and limits of military intervention abroad." - Michael Kazin, author of WAR AGAINST WAR: THE AMERICAN FIGHT FOR PEACE, 1914-1918 and professor of history, Georgetown University

"Wagner has produced a superb introduction to the US role in WW I. . . .The book, aimed at general readers, offers an excellent combination of political, social, and military history. The style is superb, the abundant illustrations (many in color) well chosen, the observations both pointed and balanced." - Choice Magazine