A History of New York in 27 Buildings: The 400-Year Untold Story of an American Metropolis (Hardcover) | Northshire Bookstore
Skip to main content

A History of New York in 27 Buildings: The 400-Year Untold Story of an American Metropolis (Hardcover) 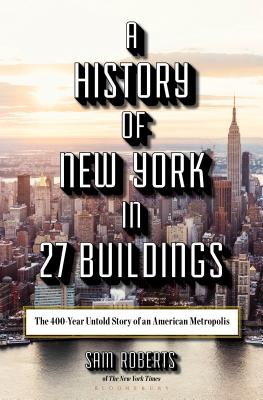 From the urban affairs correspondent of the New York Times--the story of a city through twenty-seven structures that define it.

As New York is poised to celebrate its four hundredth anniversary, New York Times correspondent Sam Roberts tells the story of the city through bricks, glass, wood, and mortar, revealing why and how it evolved into the nation's biggest and most influential.

From the seven hundred thousand or so buildings in New York, Roberts selects twenty-seven that, in the past four centuries, have been the most emblematic of the city's economic, social, and political evolution. He describes not only the buildings and how they came to be, but also their enduring impact on the city and its people and how the consequences of the construction often reverberated around the world.

A few structures, such as the Empire State Building, are architectural icons, but Roberts goes beyond the familiar with intriguing stories of the personalities and exploits behind the unrivaled skyscraper's construction. Some stretch the definition of buildings, to include the city's oldest bridge and the landmark Coney Island Boardwalk. Others offer surprises: where the United Nations General Assembly first met; a hidden hub of global internet traffic; a nondescript factory that produced billions of dollars of currency in the poorest neighborhood in the country; and the buildings that triggered the Depression and launched the New Deal.

With his deep knowledge of the city and penchant for fascinating facts, Roberts brings to light the brilliant architecture, remarkable history, and bright future of the greatest city in the world.

Sam Roberts is the Urban Affairs Correspondent for The New York Times. He was formerly city editor for The New York Daily News. His reporting has won prizes, including awards from the Newspaper Guild of New York and the Peter Kihss Award for the City of New York. His books include Who We Are Now and The Brother, which was a finalist for the National Book Critics Circle Award. His magazine articles have appeared in The New York Times Magazine, the New Republic, New York Magazine, and Empire State Report. He lives--where else?--in New York City.

"A nuanced, richly researched book that delves deep into the history of the city and speaks volumes about its past, present and future . . . a must-read as the metropolis, now almost 400 years old, continues to (re)shape itself and the world." - NPR.org

"Fun facts abound in A History of New York in 27 Buildings . . . An enjoyable portrait of New York as embodied in 27 key landmarks of its built environment." - Newsday

“[Roberts] offers a solid education in New York architecture that pays close attention to the personalities, politics, economics, and natural disasters that inevitably accompany it . . . An entertaining picture of New York through the centuries.” —Kirkus

“[Roberts is] a witty and informed narrator whose enthusiasm for his subject is contagious. This lucid account will help New Yorkers to see their city in a new light.” —Publishers Weekly

“A gripping account . . . [An] excellent book, written with flair and alive with the agony of the age.” —The Wall Street Journal on THE BROTHER

“[Sam Roberts] is a deft writer able to weave science, history, and criminal investigation into an absorbing narrative that at times reads like a spy thriller--even if you know how the story ends.” —Boston Globe on THE BROTHER

“Lively, entertaining . . . An original and knowledgeable guide to the history of New York [that] reminds us of why we continue to love and treasure this endlessly fascinating city.” —Francine Prose on A HISTORY OF NEW YORK IN 101 OBJECTS

“The best thing to happen to New York since Nathan's hot dogs and Junior's cheesecake.” —Marty Markowitz, former Borough President of Brooklyn on A HISTORY OF NEW YORK IN 101 OBJECTS

“A thorough, lively analysis. With wit--and a wary eye for the manipulative uses to which statistics are put in politics and the marketplace--[Roberts] illuminates the forces driving the nation's social-policy debates.” —The New York Times on WHO WE ARE NOW

“[A] fabulous collection of essays. With wit and grace, he tells stories of its citizens--some illustrious, others not; some living, others long dead. But the story he's really telling is that of New York, and he nails it.” —New York Daily News on ONLY IN NEW YORK