Another Little Piece of My Heart: My Life of Rock and Revolution in the '60s (Hardcover) 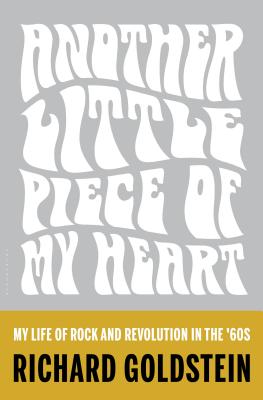 Richard Goldstein was a pioneer and chronicler of my favorite era, the '60s; he was the first rock critic to write a regular column (in the Village Voice) on the musicians and music of the times. Embedded in the heart of the culture he wrote about the connections between the music and political unrest in one of the most pivotal times in history. He was there, he lived it and wrote passionately about it. — Liz Barnum

"A deeply felt and largely compelling portrait of an age that indelibly marked everyone who took part in it. Indispensable for understanding the culture of the '60s and the music that was at its heart." - starred review, Kirkus Reviews

In 1966, at the ripe age of 22, Richard Goldstein approached The Village Voice with a novel idea. "I want to be a rock critic," he said. "What's that?" the editor replied.

It was a logical question, since rock criticism didn't yet exist. In the weekly column he would produce for theVoice, Goldstein became the first person to write regularly in a major publication about the music that changed our lives. He believed deeply in the power of rock, and, long before it was acceptable, he championed the idea that this music was a serious art form. From his unique position in journalism, he saw the full arc of events that shaped culture and politics in the 1960s--and participated in them, too. He toured with Janis Joplin, spent a day at the Grateful Dead house in San Francisco, and dropped acid with Brian Wilson and the Beach Boys. He was present for Martin Luther King's "I Have a Dream" speech, the student uprising at Columbia, and the riots at the 1968 Democratic Convention. He was challenged to a boxing match by Norman Mailer, and took Susan Sontag to her first disco. Goldstein developed close relationships with several rock legends--Janis Joplin and Jim Morrison, to name two--and their early deaths came as a wrenching shock, fueling his disillusionment as he watched the music he loved rapidly evolve from a communal rite to a vast industry--and the sense of hope for radical social upheaval fade away.

Another Little Piece of My Heart is the intimate memoir of the writer as a young man with profound ambition. It is also a sweeping personal account of a decade that no one else could provide--a deeply moving, unparalleled document of rock and revolution in America.

Richard Goldstein is one of the founders of rock criticism, starting at the Village Voice in 1966, and has reported on culture, politics and sexuality for the New York Times, Harper's, the Nation and elsewhere. He served as executive editor of the Village Voice and was names GLAAD columnist of the year for his gay activism. His books include The Poetry of Rock, Reporting the Counterculture and Homocons: Liberal Society and the Gay Right. He teaches at Hunter College of the City University of New York.

“Another Little Piece of My Heart is a genuinely essential addition to the bibliography of the revolutionary '60s.” —The Guardian

“As arguably the first rock critic, Richard Goldstein was afforded access that would make most fans drool. This memoir finds him getting stoned with Brian Wilson, visiting the Grateful Dead's Haight-Ashbury home, and witnessing a drunken, angry Jim Morrison trying to record with the Doors. Goldstein's tone is thoughtful but humble, and his stories flesh out an era in which rock danced with politics, chaos, and community.” —Rolling Stone

“For Richard Goldstein, writing about music was a lifeline. The utopian energies of rock provided a window through which he could glimpse a very different kind of future being born. And he recognized instinctively that this new music required a new kind of writing to comprehend it. So he invented it . . . Much of the most riveting material in the book centers on the connection he made with some of the most brilliant and vulnerable of the era's artists: Brian Wilson, Jim Morrison, John Lennon, Janis Joplin. Goldstein reminds us of a time when the relationship between a musician and her fans was personal, even intimate.” —Los Angeles Times

“Goldstein has written a witty, insightful, and at times self-lacerating, memoir . . . [of his] experience as rock's most deeply embedded chronicler.” —New York Daily News

“A deeply felt and compelling portrait of an age that indelibly marked everyone who took part in it. Indispensable for understanding the culture of the '60s and the music that was at its heart.” —Kirkus Reviews

“Goldstein was in the right place at the right time, as he explains in this entertaining music memoir. [His] confessional tone gives significant warmth to the book, encouraging the reader to settle in as Goldstein recalls a tumultuous culture with humility and a healthy perspective.” —Publishers Weekly

“What happened to the revolution of the '60's? . . . Richard Goldstein may not be the first person to try to answer that question, but so far he is the most eloquent . . . In Another Little Piece of My Heart are some of the best explanations of how and why rock became the social force it is.” —Examiner.com

“Richard Goldstein's memoir took another little piece of my own heart. It's shrewdly observed, vividly written, steadily thoughtful, and above all honest about the exhilaration and fear that flourished in a time of giddy reinvention.” —Todd Gitlin, author of THE SIXTIES: YEARS OF HOPE, DAYS OF RAGE

“In silver boots, with flowing hair, Richard Goldstein strode through the 1960s like a hero in a picaresque adventure. He pioneered the new form of rock criticism; reported from the front lines of progressive politics and the counterculture; and, most of all, thoroughly lived the changes that revolutionary era wrought. This memoir provides unique views of some of the time's most colorful figures, including Janis Joplin, Jim Morrison, Susan Sontag, and Andy Warhol. But most of all, it shows us how one electric consciousness--Goldstein's own--emerged and evolved as America itself became new.” —Ann Powers, author of WEIRD LIKE US: MY BOHEMIAN AMERICA and TORI AMOS: PIECE BY PIECE