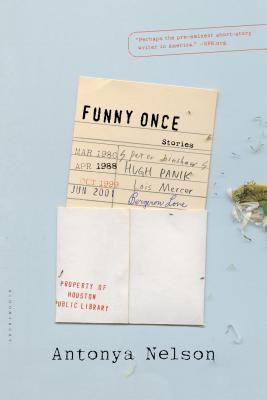 By Antonya Nelson
Call or email to see if a used copy is available.
Out of Print

Michael Chabon once said, "I scan the tables of contents of magazines, looking for Antonya Nelson's name, hoping that she has decided to bless us again." And now she has blessed us again, with a bounty of the stories for which she is so beloved. Her stories are clear-eyed, hard-edged, beautifully formed. In the title story, "Funny Once," a couple held together by bad behavior fall into a lie with their more responsible friends. In "The Village," a woman visits her father at a nursing home, recalling his equanimity at her teenage misdeeds and gaining a new understanding of his own past indiscretions. In another, when a troubled girl in the neighborhood goes missing, a mother worries increasingly about her teenage son's relationship with a bad-news girlfriend. In the novella "Three Wishes," siblings muddle through in the aftermath of their elder brother's too-early departure from the world.

The landscape of this book is the wide open spaces of Kansas, Texas, New Mexico, and Colorado. Throughout, there is the pervasive desire to drink to forget, to have sex with the wrong people, to hit the road and figure out later where to stop for the night. These characters are aging, regretting actions both taken and not, inhabiting their extended adolescences as best they can. And in Funny Once, their flawed humanity is made beautiful, perfectly observed by one of America's best short story writers.

Antonya Nelson is the author of nine books of fiction, including the collections Female Trouble and Nothing Right, and the novels Talking in Bed, Nobody's Girl, and Bound. Her work has appeared in the New Yorker, Esquire, Harper's, and many other magazines. She is a recipient of a Guggenheim Fellowship, an NEA grant, and, recently, the Rea Award for Short Fiction. Nelson lives in New Mexico, Colorado, and Texas, where she holds the Cullen Chair in Creative Writing at the University of Houston.

“Antonya Nelson's gloriously debauched new collection, Funny Once, finds that conventions are made for flouting, from an eminent professor who sleeps with his young wife's best friend to former college competitors who embark on a lost weekend.” —Vogue

“[Nelson shows] great talent in constructing each story in its own unique world . . . [She] makes sure that we see the silliness alongside the strife, and the heart within the hardships.” —Time Out New York, four stars

“Nelson's stories are busy, noisy, crowded affairs that jump straight into the center of the conflict . . . Nelson treats [her characters'] weaknesses with high-spirited humor and ample forgiveness. ‘If you took all the lessons of others, you might never do anything,' thinks an indulgent grandmother in ‘First Husband.' And if people stopped screwing up, we wouldn't have any more of Ms. Nelson's excellent stories to read.” —Wall Street Journal

“Nelson's run as one of the finest contemporary short story writers takes an exhilarating leap forward with her outrageously superb seventh collection. Her particular wizardry in the short form (Nelson is also the author of four novels) is found in her exceptional melding of pristine prose with a rampaging imagination and a comic's perfect timing. Nelson is scandalously funny, her characters are royally screwed up and wildly inept, and their dire predicaments bust down the doors on the most painful of life's cruel jokes, from betrayal to divorce, addiction, and old age. Nelson excels at multigenerational chaos, portraying with equal verve surprising children and ornery adults as well as neurotic dogs and places rife with hidden angst, namely Wichita, Telluride, and Houston . . . Each of Nelson's magnetizing stories generates atomic vibrancy and achieves the psychic mass of a novel.” —Booklist, starred review

“Graced with credible characters whose friendships, marriages, progeny, and divorces feel familiar and lived in, Nelson's supple stories have appeared in prestigious magazines and prize anthologies for two decades. This seventh short story collection (her tenth book of fiction) will delight longtime fans while likely propelling new readers to explore her earlier work. . . . The narratives are driven by characters whose crises and moments of insight take the reader by surprise, but Nelson herself is completely in control of her complex tales, in which infidelities are exposed or never quite happen and old friends surprise one another with new revelations that take 20 pages to unfold. . . . Nelson is one of the leading practitioners of the contemporary short story.” —Library Journal, starred review