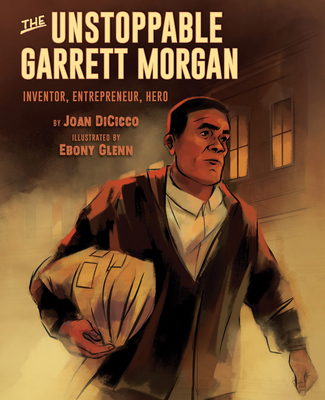 Garrett Morgan, a prolific African American inventor and entrepreneur, must test his latest invention in a daring rescue after an explosion at the Cleveland Waterworks.

Living by these words made inventor and entrepreneur Garrett Morgan unstoppable Growing up in Claysville, Kentucky, the son of freed slaves, young and curious Garrett was eager for life beyond his family's farm. At age fourteen, he moved north to Cleveland, where his creative mind took flight amidst the city's booming clothing-manufacturing industry.

Using his ingenuity and tenacity, Garrett overcame racial barriers and forged a career as a successful businessman and inventor. But when a tunnel collapsed, trapping twenty men, the rescue would test both Garrett's invention -- and his courage.

Told in compelling prose by debut picture-book author Joan DiCicco and dynamic illustrations from artist Ebony Glenn, The Unstoppable Garrett Morgan is a powerful biography of an extraordinary man who dedicated his life to improving the lives of others.

Growing up, JOAN DiCICCO loved reading biographies and was inspired by other people's stories. She was drawn to Garrett Morgan's story after seeing him described in an anthology of African-American inventors as the only "hero-inventor" among them. This is her first picture book. Joan and her husband live in Portland, Oregon. You can visit her online at www.joandiciccowriter.com. EBONY GLENN is a children's book illustrator who enjoys bringing stories to life with whimsical and expressive imagery. A passion for the arts, great storytelling, and advocating for more diverse narratives in children's books, she aims to create art that will foster a love of reading in young readers. You can find her online at ebonyglenn.com