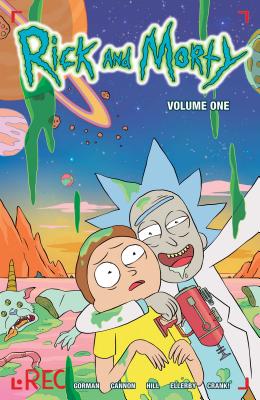 This is book number 1 in the Rick and Morty series.

The hit comic book series based on Dan Harmon and Justin Roiland's hilarious [adult swim] animated show RICK & MORTY is now available in its first collection! Join the excitement as depraved genius Rick Sanchez embarks on insane adventures with his awkward grandson Morty across the universe and across time. Caught in the crossfire are his teenage granddaughter Summer, his veterinary surgeon daughter Beth, and his hapless son-in-law Jerry. This collection features the first five issues of the comic book series, including "THE WUBBA LUBBA DUB DUB of WALL STREET," "MORT-BALLS!" and more, along with hilarious mini-comics showcasing the whole family.

Zac Gorman is a cartoonist from Detroit, MI, raised on the sacred suburban triumvirate of video games, cartoons, and comic books. He's the creator of the popular webcomic Magical Game TIme and has worked on several animated television series as a storyboard artist and character designer. Zach currently resides in Chicago with his far more talented wife and a furry little monster who most people mistake for a cat.

CJ Cannon is a self-taught artist living in Nashville, Tennessee. When they're not working on comics, outside riding their bike, or drumming, they're almost always in the house drawing fanart.

Marc Ellerby is a comics illustrator living in Essex, UK. He has worked on such titles as Rick and Morty, Doctor Who, Regular Show and The Amazing World of Gumball. His own comics (which you should totally check out!) are Chloe Noonan: Monster Hunter and Ellerbisms. You can read some comics if you like at marcellerby.com.