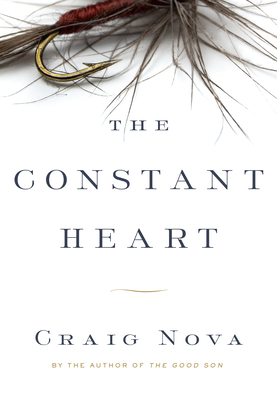 An astronomer describes his relationship with his father in this beautiful novel, with two compassionate and honorable men (unusual in contemporary fiction), stunning evocation of the natural world and a suspenseful plot driven by an irresistible woman. — Louise Jones

What does it mean to be a decent man? To love well, with fidelity and constancy? These are the lessons that Jake's father, a wildlife biologist, tries to impart to his son, often on fishing trips to their beloved Furnace Creek. Bound up in the laws of Einstein's theories, these lessons will ultimately influence Jake's own career as an astronomer. Out on the creek, both father and son conquer their greatest challenges: marital infidelity, professional setbacks, and Jake's long term, passionate obsession with his childhood crush. The Constant Heart is a potent, and moving book that utilizes the laws of nature and science to illuminate what it means to be a man today. It is an inspiring book that most immediately celebrates the bonds of father and son while exploring the beauty and intensity of love and the profound attachments between human beings, even in the face of great disease and danger.

Craig Nova is the award-winning author of twelve novels and one autobiography. His writing has appeared in Esquire, The Paris Review, The New York Times Magazine, and Men's Journal, among others. He has received an Award in Literature from the American Academy and Institute of Arts and Letters and is a recipient of a Guggenheim Fellowship. In 2005 he was named Class of 1949 Distinguished Professor in the Humanities at the University of North Carolina, Greensboro.

Praise for The Constant Heart

"[A] psychologically intriguing and richly metaphorical plot is irradiated by rhapsodic visions of celestial forces and earthy glory and trouble. A heart-jolting yet solicitous tale fueled by Nova’s passionate reminder that not all men are brutes."Booklist

Honor, destiny, caprice, oblivion Nova's novel parlays them all into a life-and-death struggle filled with moments (a surreal appliance-store holdup, a good-guys/bad-guys chase across the wilds of upstate New York) that feel as elemental as they are revealing of human foible and character.” The Seattle Times

"[A] meditative, philosophical, and beautifully realized novel about the nature of embattled American manhood. Both Jake and his father are deeply sympathetic characters, and Nova celebrates perhaps most fundamentally here the compassionate and honorable way they treat the women in their livesdiscussions of Einstein's theory of relativity are interspersed throughout the novel, providing a fascinating thematic element related to the search for something constant in a world defined by change and instability. This is a novel of deep maturity and thoughtfulness.” Library Journal

Superb in prose and its evocations of character and nature, The Constant Heart is a wonderful novel by a writer whose range continues to dazzle me. As a writer, I marveled at the pure scope of Nova's gifts as a storyteller. As a reader, I simply enjoyed my ride through the emotional heart of this affecting novel.” Oscar Hijuelos