Six and a Half Deadly Sins (A Dr. Siri Paiboun Mystery #10) (Paperback) 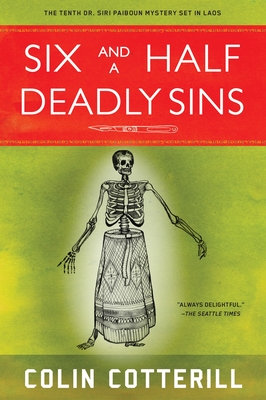 This is book number 10 in the A Dr. Siri Paiboun Mystery series.

Laos, 1979: Dr. Siri Paiboun, the twice retired ex-National Coroner of Laos, receives an unmarked package in the mail. Inside is a handwoven pha sin, a colorful traditional skirt worn in northern Laos. A lovely present, but who sent it to him, and why? And, more importantly, why is there a severed human finger stitched into the sin’s lining?

Siri is convinced someone is trying to send him a message and won’t let the matter rest until he’s figured it out. He finagles a trip up north to the province where the sin was made, not realizing he is embarking on a deadly scavenger hunt. Meanwhile, the northern Lao border is about to erupt into violence—and Dr. Siri and his entourage are walking right into the heart of the conflict.

Colin Cotterill is the Dilys Award–winning author of ten other books in the Dr. Siri Paiboun series: The Coroner’s Lunch, Thirty-Three Teeth, Disco for the Departed, Anarchy and Old Dogs, Curse of the Pogo Stick, The Merry Misogynist, Love Songs from a Shallow Grave, Slash and Burn, The Woman Who Wouldn’t Die, and I Shot the Buddha. He lives in Chumphon, Thailand, with his wife and five deranged dogs.

Praise for Six and a Half Deadly Sins

"Dr. Siri and his misfit friends have relied on caustic humor to stay sane . . . The question is: Can his cynical sense of humor get him out of this jam?"
—The New York Times Book Review

"Dr. Siri Paiboun will be a gladdening complement to many mystery-reader’s table. Some of you have likely already shared your happy table with Dr. Siri; others of you will poo-poo the suggestion. But if you are unfamiliar with Paiboun works, it is time to crawl out of whatever cave you have been living in. This is for you."
—The Christian Science Monitor

"Always delightful . . . The doctor and his profoundly eccentric friends, wife and (now former) colleagues retain their sardonic senses of humor in a vexing and sometimes scary time."
—The Seattle Times

"When the first sentence of a book starts with a 1978 Vietnamese invasion of Cambodia, a public address system mishap, and a severed finger sewn into a skirt, you know you're not in for a run-of-the-mill mystery . . . But it's marvelous fodder for Cotterill's laugh-out-loud humor."
—Mystery Scene

"Dr. Siri’s iconoclastic spirit and caustic wit are a delight to witness."
—Booklist

"Generous dollops of wit and humor . . . We can never be sure what clever ruse is being employed."
—Dayton Daily News

"Laughter is a subversive weapon when you live under a repressive regime. That's the take-away lesson from Colin Cotterill's gravely funny novels set in Indochina in the 1970s."
—The New York Times Book Review

"The latest Dr. Paiboun novel by Colin Cotterill, showcases both author and detective at the top of their games. It's an entertaining and captivating mystery underpinned by a fascinating exploration of the tangled history of Laos."
—The Christian Science Monitor

“Cotterill has never been better than in this ninth outing for acerbic Dr. Siri . . . The action builds to an ingenious resolution.”
—Publishers Weekly, Starred Review