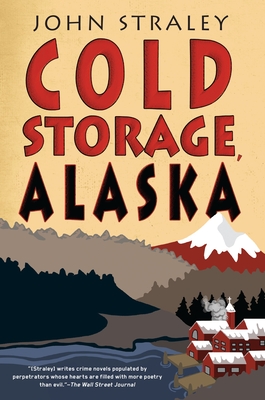 By John Straley
Call or email to see if a used copy is available.
Hard to Find - May no longer be available

This is book number 2 in the A Cold Storage Novel series.

Straley writes his quirky mysteries several years apart, but it's always worth the wait. Here, Clive McCahon, recently released from prison, heads for his remote hometown where his straight-arrow brother still lives. That initiates only one of a series of crazy mix-ups. Great fun! — Louise Jones

An offbeat, often hilarious crime novel set in the sleepy Alaskan town of Cold Storage from the Shamus Award winning author of the Cecil Younger series.

Cold Storage, Alaska, is a remote fishing outpost where salmonberries sparkle in the morning frost and where you just might catch a King Salmon if you’re zen enough to wait for it. Settled in 1935 by Norse fishermen who liked to skinny dip in its natural hot springs, the town enjoyed prosperity at the height of the frozen fish boom. But now the cold storage plant is all but abandoned and the town is withering.

Clive “The Milkman” McCahon returns to his tiny Alaska hometown after a seven-year jail stint for dealing coke. He has a lot to make up to his younger brother, Miles, who has dutifully been taking care of their ailing mother. But Clive doesn’t realize the trouble he’s bringing home. His vengeful old business partner is hot on his heels, a stick-in-the-mud State Trooper is dying to bust Clive for narcotics, and, to complicate everything, Clive might be going insane—lately, he’s been hearing animals talking to him. Will his arrival in Cold Storage be a breath of fresh air for the sleepy, depopulated town? Or will Clive’s arrival turn the whole place upside down?

The youngest of five children, John Straley was born in Redwood City, California, in 1953. He received a BA in English from the University of Washington and, at the urging of his parents, a certificate of completion in horse shoeing. John never saw himself living in Alaska (where there are no horses left to shoe), but when his wife, Jan, a prominent whale biologist, announced she was taking a job in Sitka, the two headed north and never left. John worked for thirty years as a criminal defense investigator in Sitka, and many of the characters that fill his books were inspired by his work. Now retired, he lives with his wife in a bright green house on the beach and writes in his weather-tight office overlooking Old Sitka Rocks. The former Writer Laureate of Alaska, he is the author of ten novels.

"Straley strikes the perfect balance of humor and pathos in this story about the McCahon brothers.”
—New York Times Book Review

"[Straley] writes crime novels populated by perpetrators whose hearts are filled with more poetry than evil."
—The Wall Street Journal

"Straley isn’t prolific, but when he does publish a book it’s a gem... The crime aspect of 'Cold Storage, Alaska' is pretty casual. Straley’s mostly interested in his characters and how they interact on a personal level... It’s always a pleasure to read Straley’s vivid studies of these folks — the slightly cracked, rugged and very funny characters of the Far North."
—The Seattle Times

“Thoroughly enjoyable and slightly wacko... Dashes of magical realism mixed with ironic humor reminiscent of the Coen brothers and violence worthy of Quentin Tarantino make this second series novel a winner. Compelling characters and deft treatment of themes like redemption and the power of community take it to a level beyond.”
—The Boston Globe

“Lesser writers look to their characters’ poor choices and attempts to rectify them, John Straley loves his characters for just those choices. Hölderlin wrote: 'Poetically man dwells on the earth.' Some of us wind up in limericks, some in heroic couplets. But damned near every one of us, sooner or later, ends up in one of Straley’s wise, wayward, wonderfully unhinged novels.”
—James Sallis, author of Drive and the Lew Griffin mysteries

“What a warm, engaging, profoundly human book this is: its skin crackling, its heart enormous and open. It's a mystery with judicious blasts of violence and dread, but it opens also onto the bigger mysteries—of community, of family, of place. The several lives that intertwine throughout the story reach moments of quiet grace that resonate stealthily but deeply.”
—John Darnielle, lead singer of The Mountain Goats and author of Wolf in White Van

“Kind, smart and deeply moving... ‘Cold Storage, Alaska’ is certainly a wild mystery in the vein of Elmore Leonard's ‘Get Shorty’ years or all of Carl Hiaasen, it is just as much an homage to small towns and the people who fill them. What elevates Straley above so much of the competition is how very much he cares about the people and places he writes about.”
—Alaska Dispatch

“John Straley’s Cold Storage, Alaska is a snapshot of the USA, with its faults and struggling possibilities. Comic, engrossing, exotic yet familiar, it’s precise to the place and its feel, keen on character and foible, full of lore and history, and rich in little off-to the-side sightings of trees, winds, waves, birds and mammals… Over the top good.”
—Gary Snyder, Pulitzer Prize winning author of Turtle Island

“A story of a town with nothing much to offer but rain, salmon fishing, drink and gossip--but that's plenty for Straley to work with. Cold Storage may be "a town that gloried in [its] bad habits... clinging to the side of the mountains with no roads, no cars, and virtually no sense of the outer world," but in Straley's hands, it is rich in character, music, humor and compassion.”
—Shelf Awareness, Starred Review

"Straley, author of The Big Both Ways, has created a wonderfully evocative place in Cold Storage. His evocation of nature and human nature approaches the lyrical, and he seems guided by Faulkner’s dictum that the only thing truly worth writing about is the human heart in conflict with itself."
—Booklist, Starred Review

“Fast-paced and funny as hell.”
—BookRiot

"If you've never been to Alaska, this novel will take you to its wilderness and small town areas in a most convincing manner. If you have been to Alaska, you will feel very at home in the pages of this diverting novel."
—Deadly Pleasures

“The cast of eccentric characters, the sharp, witty dialogue, and the chaotic, frenzied pace of the narrative would do Preston Sturges proud… Those who like their crime with a healthy side of humor could hardly do better... Quirky, funny and compulsively readable.”
—Kirkus

“Like the Coen brothers on literary speed, John Straley is among the very best stylists of his generation. Cold Storage, Alaska is truly stunning, poetic, and smart.”
—Ken Bruen, Shamus Award winning author of The Guard

“The nature of small-town life is perfectly rendered here, as are the wonders of coastal Alaska... [For] those who appreciate an unusual location and set of characters in their mysteries.”
—Library Journal

“Don't think Westlake for this caper crime novel, though; think Clyde Edgerton maybe, or a tender, kinder version of Janet Evanovich … What makes Straley (a criminal investigator in the ‘real’ Alaska) and his books stand out is the way his characters treat each other: with a reliable sense of love and awe... [A] wacky and enjoyable romp.”
—Beth Kannell, Kingdom Books, Waterford, VT

“Straley reveals his characters with unflinching pride and doesn’t mock or belittle their unique take on life… His description of the human condition as played out by his band of characters ranges from pathetic to amazingly humorous… A joy to read.”
—The Durango Herald

“Cold Storage, Alaska is by turns funny, serious, frightening, philosophical, exaggerated... and intimate. It is filled with odd situations and the kind of offbeat characters that keep your attention glued to the page... [A] very special read.”
—Kittling Books

“Straley gives us an Alaskan town frozen in time and in its ways; and then, by masterful degrees, he shows us its vibrant, violent thaw.”
—Sam Alden, author of It Never Happened Again

"Poetic...like so many exceptional works in this genre, Cold Storage, Alaska shows that extreme circumstances can occasionally force people to be stronger and more resilient than they thought possible. Straley accomplishes all of this with a bare minimum of violence and not a serial killer in sight.”
—Kirkus Reviews Blog

“[A] delightful, fast-moving novel packed with colorful misfit characters… Straley's talented prose leaves the reader with a smile on his face, eagerly awaiting the next installment in this series.”
—Nancy Simpson-Brice, Book Vault, Oskaloosa, IA

“[Cold Storage, Alaska] has the tone of an ensemble comedy… A marriage of ‘Northern Exposure’ with ‘Waking Ned Devine.’”
—Anchorage Daily News

“Quirky the people of Straley's Cold Storage may occasionally be, but they are never less than real, with their struggles, their dreams, their failures and modest successes, and their binding sense of community that lightly overlays their fierce if sometimes false self-reliance… A gem of story, marvelously told, that repays the reader many times over for the reading.”
—The Drowning Machine

“A loving, evocative portrait of an Alaskan community full of characters whose various schemes and dreams provide plenty of forward momentum.”
—Reviewing the Evidence

“Speaking of literary miracles, read John Straley's new novel ‘Cold Storage, Alaska.’ It is so good. A comedy, a love story, a true-to-life small-town Alaska tale, plus there's a great dog in it. I loved it. I wish I wrote that book.”
—Heather Lende, author of Take Good Care of the Garden and the Dogs and If You Lived Here, I'd Know Your Name

“A quirky, fun novel, in the same vein as Tim Dorsey and Carl Hiaasen. Straley has brought together a quirky cast of characters which might well fit into any small town in America.”
–Mysteries Galore

“If the frigidity and minimalism of Scandinavian noir has worn you down a little, grab Cold Storage, Alaska for a lighter look at life and crime in a cold place. You may end up wanting to go there.”
—Crime Fiction Lover

“Chandler, Ross Macdonald, James Crumley... Straley proves once again that he is up there with the great ones.”
—Chicago Tribune

“Now and then a writer dares to flout the rules and in so doing, carves out a niche that belongs to him alone. John Straley's novels are like no others.”
—San Diego Tribune