Chilled to the Bone (A Sergeant Gunnhildur Novel #3) (Paperback) 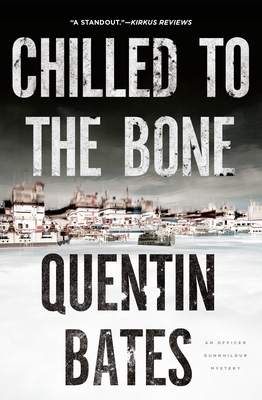 This is book number 3 in the A Sergeant Gunnhildur Novel series.

When Sergeant Gunnhildur Gísladóttir of the local police force is called in to investigate the death of a man found tied to a bed in one of Reykjavík's nicest hotels, she finds no sign of criminal activity but suspects there may be more to the case than meets the eye. Could the death of the shipowner be related to a local gangster’s recent return to Iceland after many years abroad?

What begins as a straightforward case for Gunnhildur soon explodes into a dangerous investigation, involving a discreet bondage society that ruthless men will go to violent extremes to keep secret.

Quentin Bates lived in Iceland for ten years before moving back to the UK in 1990, where he became a full-time journalist at a commercial fishing magazine. He and his wife frequently return to Iceland, where they have many friends, including several in the Reykjavík police.

“A solid police procedural with some genuinely rewarding surprises at the end. When it comes to frosty crime novels, Iceland may just be the new Sweden.”
—Booklist

“In addition to Bates’ well-paced plots, it’s his protagonist—dealing in these pages not only with professional responsibilities, but with a personal one . . . who makes this procedural series a standout.”
—Kirkus Reviews

"Liberally laced with laughter and menace . . . This woman [Gunnhildur Gisladottir] is a keeper."
—Kittling Books

“An entirely satisfying police procedural . . . A good recommendation if you like a slice of Scandi crime with a good plot, a twist of wry humour and an engaging and plausible detective.”
—Raven Crime Reads

“Bates writes with growing confidence about a place and world he knows well . . . Iceland is brilliantly brought to life from high-life to low life in a plot that unpeels like an onion. Highly recommended.”
—Hack Writers

“Chilled to the Bone is an excellent novel. The elements of the crimes in motion are nicely laid out through the different points of view . . . The book flirts with Scandinavian darkness, something that’s built into the psyche of books like this, if only because of the enduring cold during winter.”
—Thinking About Books

“I love this series. Gunna is a normal woman . . . [Chilled to the Bone] is set in a very believable Iceland too—post banking crisis and with an economy which has to keep looking over the edge to see if it's still in freefall.”
—The Bookbag

"Required reading for anyone who wants a sense of how calamitous Iceland's meltdown was—and what just might be in store for American police procedurals next."
—Kirkus Reviews

"Bates does a fine job with both Gunna and her town, her acerbic boss and an online blogger who keeps us abreast of events in Icelandic media and politics."
—Toronto Globe and Mail

"In Gunna Gísladóttir, Quentin Bates has created a character who appeals both on professional and personal levels."
—Examiner.com