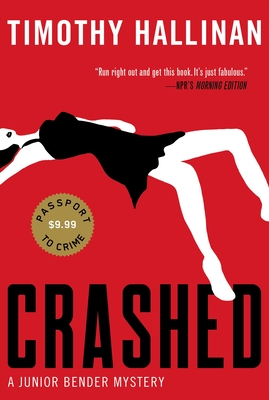 This is book number 1 in the A Junior Bender Mystery series.

Junior Bender is a burgler turned private eye for other criminals. Set in Los Angeles, Junior is blackmailed into "babysitting" a former child star, now fallen on hard times because of her addictive behavior. She's making a comeback in a less than mainstream movie. Fun! — Sarah Knight

The trouble is, he’s not sure he can go through with the job, blackmail or no blackmail. The actress lined up to star in the film, Thistle Downing, is an ex-child star who now lives alone in a drug-induced stupor, destitute and uninsurable. This movie would be scandalous fodder for tabloids around the country. Junior knows what he should do—get Thistle out and find her some help—but doing the right thing will land him on the wrong side of some scary people.

Timothy Hallinan is the Edgar- and Macavity-nominated author of thirteen widely praised books, including The Fear Artist, Crashed, Little Elvises, and The Fame Thief. After years of working in Hollywood, television, and the music industry, he now writes fulltime. He divides his time between California and Thailand.

"If you're looking for a mystery with a fresh new hero then you'll want to run right out and get this book. It's just fabulous. If you have a plane to take, then this is the book to grab."
—NPR's Morning Edition

"If Carl Hiaasen and Donald Westlake had a literary love child, he would be Timothy Hallinan. The Edgar nominee's laugh-out-loud new crime series featuring Hollywood burglar-turned-private eye Junior Bender has breakout written all over it... A must-read."
—Julia Spencer-Fleming, New York Times bestselling author of One Was a Soldier

"Junior Bender is today’s Los Angeles as Raymond Chandler might have written it. Tim [Hallinan] is a master at tossing out the kind of hard-boiled lines that I wish I thought of first."
—Bruce DeSilva, Macavity & Edgar Award-winning author of Rogue Island

“This is Hallinan at the top of his game. It's laugh-out-loud funny without ever losing any of its mystery. It’s a whole new style and I love it. Junior Bender—a crook with a heart of gold—is one of Hallinan's most appealing heroes, rich with invention, and brimming with classic wit. I can’t recommend it highly enough.”
—Shadoe Stevens, Late Late Show with Craig Ferguson

"The story is well designed and well told, and the dialogue sparkles. In a genre perhaps slightly overstuffed with crook-heroes, the book is like a breath of fresh air."
—Booklist

"This is one of those books you long for, wait for, and find once or twice a year"
—Beth Kanell, proprietor of Kingdom Books, Vermont

"This fast-paced first in a series is great fun."
—Stop You're Killing Me (blog)

“Timothy Hallinan does everything a writer should do whose goal is to keep a reader entertained from the first sentence to the last.”
—Tzer Island (blog)

"Hallinan builds a believable plot, filled with both humor and pathos."
—Reviewing the Evidence (blog)

“The writing is intelligent, relaxed, and fun to read. Crashed is a pleasurable outing, without the personal risk, to the criminal underbelly of Los Angeles, where moral ambiguity fills the air.”
—Read Me Deadly (blog)

"This detective potboiler with its oddball characters will keep you chuckling."
—The Martha's Vineyard Times

“If you're in the mood for a mystery that's just plain fun, this is the one for you... Timothy Hallinan knows how to write a smart aleck main character who has his own set of morals and a heart of gold.”
—Kittling Books (blog)

"Could not stop laughing.  Tim Hallinan is sharp as a blade, has a wicked eye for human nature and keeps the reader guessing and rooting for Junior Bender all the way."
—Helen Simonson, New York Times bestselling author of Major Pettigrew's Last Stand

"Junior Bender is bound to be the topic of conversation amongst book lovers and crime fiction fans for a long, long time."
—Robert Carraher, Seattle Post-Intelligencer

"Hugely,splendidly entertaining... Full of delightful characters, and dialogue that provides at least one good laugh on every page, the book is so hard to put down you’ll swear it’s been glued to your hands."
—Booklist, STARRED Review (Little Elvises)