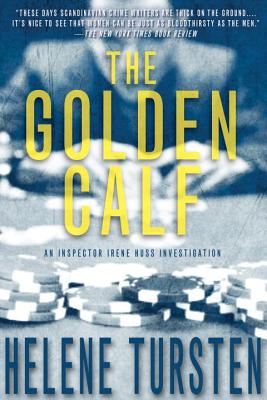 This is book number 5 in the Inspector Irene Huss Investigation series.

Swedish detective Inspector Irene Huss is back. Her latest case involves the murders of three men in an upscale Goteborg neighborhood. The only link among the men is a dot com superstar who also is the wife of one of the victims. She refuses to cooperate. Is she involved with the murders or about to become another a victim. Well written very entertaining police procedural. — Sarah Knight

Soho's perennially popular Swedish crime series featuring Detective Inspector Irene Huss jiujitsu champion, mother of teenage twin girls, and investigator on Goteborg Murder Squad is back
Three men have been shot in one of Goteborg's most fashionable neighborhoods, sending Irene Huss and her colleagues on a goose chase through a tony world of expensive cars and fancy homes. All three victims seem to be tied to one person, the glamorous dot-com darling Sanna Kaegler-Ceder, but Sanna isn t talking, even when her own life seems to be at stake.

Helene Tursten was a nurse and a dentist before she turned to writing. Other books in the Irene Huss series include Detective Inspector Huss, The Torso, The Glass Devil, Night Rounds, The Fire Dance, and The Beige Man. She was born in Goteborg, Sweden, where she now lives with her husband and daughter.

Praise for The Golden Calf


"Huss and Persson are empathetic and attractive characters, willing to take the extra step to navigate the case’s Byzantine complexity."
—Adam Woog, The Seattle Times

"For decades the Swedes have excelled at crime fiction, which is often as gloomy as their long winter nights, filled with philosophical asides on life and politics. Procedure, rather than clues or flights of deductive fancy, are the usual hallmarks of a Scandinavian thriller. You'll find plenty of that in Helen Tursten's finely crafted novels but she also pays homage to the grand old form, down to a bit of old-fashioned alibi busting."
—Denver Post

"Compelling characters and steady suspense make this a fine Nordic crime novel in the spirit of Henning Mankell and Karin Fossum."
—Booklist

“Both readers new to the series and avid fans will enjoy investigating this puzzling case with Inspector Huss.”
—Library Journal

"If you are looking for an additional fix of Nordic crime fiction, I suggest you add Helene Tursten to your list.... The Golden Calf being more than a mystery; it is also, in part, a cautionary tale, one that resonates quietly long after the final paragraph is read."
—Joe Hartlaub, BookReporter.com

“Huss is a complex character, competent detective, mother of twins, and wife of a celebrated chef. The author painstakingly creates a satisfying police procedural.... It is written simply and translated well, and is recommended.”
—Midwest Book Review

“Tursten strikes a good balance between ongoing character development and the unfolding of the story.... One of the best entries in a quietly strong series.”
—Reviewing the Evidence

“The Golden Calf has a plot with more twists and turns than a mountain road high in the Andes, but while you're enjoying a devious storyline, there are always...characters that live and breathe on the page. Whenever I need a bit of a Scandinavian crime fix, it's always a pleasure to turn to Detective Inspector Irene Huss.”
—Kittling Books


Praise for the Irene Huss series

"These days Scandinavian crime writers are thick on the ground. It's nice to see that the women can be just as bloodthirsty as the men."
─The New York Times Book Review

"A superior Scandinavian crime novel.... Tursten does an outstanding job of offering multiple plausible murders, making this the rare procedural that actually requires the reader to evaluate alibis, motives, and means to solve the
case."
─Publishers Weekly, STARRED REVIEW

"I couldn't put down this finely crafted, Swedish procedural with its complex story line and heart-stopping climax."
─Library Journal