Breeding the Vampire and Other Crabs: (Brachyura and Anomura in Captivity) (Hardcover) 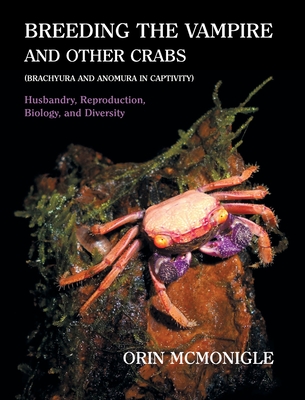 Own the ultimate crabber resource In Breeding the Vampire and Other Crabs, you will find detailed husbandry experiences for a wide variety of fascinating pet crabs. In-depth reproductive data for the popular vampire crabs are presented, while many other beautiful and fascinating species are discussed and depicted.

Crabs are arguably the most widely kept group of pet invertebrates. They are integral to the marine aquarium hobby as clean-up crews and display animals. Fiddler crabs have been a mainstay of the hobby for half a century. Larger terrestrial species, including moon crabs and hermits, have been fostered as small terrarium animals nearly as long. Exotic beauties like the vampire and panther crabs are encountered at well-stocked freshwater shops today. Although crabs have been widely cared for, reliable literature on captive husbandry and reproduction is scarce and scattered. No other group of creatures is broken up into separate avocations (and disconnected literature) to such an extreme. Breeding the Vampire and Other Crabs is a compendium designed to look at these widely loved creatures as a whole and is molded by the experiences of a life-long crab enthusiast.

See CoachwhipBooks.com for additional titles in this series by Orin McMonigle.