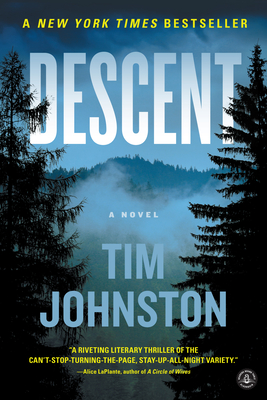 A tightly constructed thriller about the disappearance of a teenage girl in the Rocky Mountains, and the fissure created by that loss in a family that clings fiercely and stoically to hope. — Amy Palmer

“Descent is a gripping, utterly engrossing account of a girl's disappearance in the Rocky Mountains. The aftermath of this tragedy is told in alternating voices: the injured brother at the scene of the accident when she left with a stranger to get help; the mother who has been hospitalized and stunned into breathtaking grief; the father who has been unable to leave the small town where the family was vacationing when his daughter disappeared -- and most stunning of all, through the words of the victim herself. A real page-turner with a brilliantly conceived climax!”
— Kelly Estep, Carmichael's Bookstore, Louisville, KY

“Read this astonishing novel . . . The magic of his prose equals the horror of Johnston’s story.” —The Washington Post

The Rocky Mountains have cast their spell over the Courtlands, who are taking a family vacation before their daughter leaves for college. But when Caitlin and her younger brother, Sean, go out for an early morning run and only Sean returns, the mountains become as terrifying as they are majestic.

Written with a precision that captures every emotion, every moment of fear, as each member of the family searches for answers, Descent races like an avalanche toward its heart-pounding conclusion.

“A compelling thriller that is both creepy and literary . . . Descent is not just a mystery. It is an emotional story of evil, fear, acceptance and irony.”—The Denver Post

“What makes the novel unforgettable is its sense of character, its deliberate, unadorned prose and Johnston’s unflinching exploration of human endurance, physical and psychological.” —Miami Herald

“A super-charged, addictive read.” —The Missourian

“An original and psychologically deep thriller.” —Outside magazine

“Outstanding . . . The days when you had to choose between a great story and a great piece of writing? Gone.” —Esquire

“Brilliant . . . As gripping as any Everest expedition.” —Peter Heller, author of The Dog Stars

Tim Johnston, a native of Iowa City, is the author of The Current and the New York Times bestseller Descent, as well as a young adult novel, Never So Green, and the story collection Irish Girl, winner of the Katherine Anne Porter Prize in Short Fiction.