The Rental Sister: A Novel (Paperback) 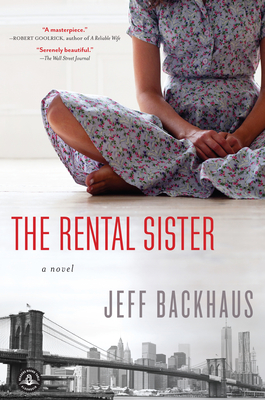 After a tragedy, Thomas Tessler withdraws from his wife and closes himself in his bedroom. The Japanese call this Hikikomori. His wife hires a young Japanese woman, called a "rental sister," to rescue him. A beautifully written novel about grief, intimacy and dealing with emotions. — Sarah Knight

“Thomas Tessler is 'hikikomari,' secluded, isolated, and depressed, a father so filled with guilt and shame he feels his only option is to lock himself in his bedroom and avoid all human contact. Thomas's wife, Silke, forced to communicate with her husband through a locked door, is desperate to save her marriage. She enlists the services of Megumi, a Japanese 'rental sister.' Her job is to break through Thomas's wall of isolation. Backhaus does a wonderful job of exploring how these three defeated people reach out to one another and begin the work of healing.”
— Beverly Bartczak, The Fine Print, Lakeside, OH

hikikomori, n. h?kik?'mo?ri; literally pulling inward; refers to those who withdraw from society.

Inspired by the real-life Japanese social phenomenon called hikikomori and the professional “rental sisters” hired to help, Hikikomori and the Rental Sister is about an erotic relationship between Thomas, an American hikikomori, and Megumi, a young Japanese immigrant hiding from her own past. The strange, insular world they create together in a New York City bedroom and with the tacit acknowledgment of Thomas’s wife reveals three human hearts in crisis, but leaves us with a profound faith in the human capacity to find beauty and meaning in life, even after great sorrow. Mirroring both East and West in its search for healing, Hikikomori and the Rental Sister pierces the emotional walls of grief and delves into the power of human connection to break through to the world waiting outside.

Named an Indie Next pick, an Amazon Best Book of the Month, one of Book Riot’s 5 to Watch, and an iBooks Store Editor’s Choice in hardcover.

Jeff Backhaus has been a cook, an art director, and a professional pilot. He lived and worked in Korea and now lives in New York. Author website: www.jeffbackhaus.com.

“A mesmerizing debut at once sorrowful, intimate, and optimistic . . . Told in crisp and lyrical prose and a nontraditional narrative that shifts between first- and third-person, Backhaus’s novel is courageous and spare, an enthralling success.” —Booklist, starred review

“[A] strange and tender debut novel . . . His writing, which is as clear and direct as flowing water, convincingly portrays the deepening connection between Thomas and Megumi.” —The Wall Street Journal

“This is one remarkable debut.” —The Toronto Star

“The book is . . . written deeply, cleanly, sparely and gently, like fingers playing over the strings of a harp. Jeff Backhaus has apparently worked at many jobs, but it seems that he has now found his vocation.” —St. Louis Post Dispatch

“Listen to the music of this novel closely. It is the sound of genius. To miss it would be to miss a story that will change the way you feel about your own life.” —Robert Goolrick, author of A Reliable Wife