What You See in the Dark (Paperback) 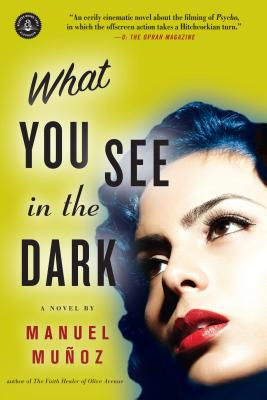 A murder in the dusty and depressed town of Bakersfield, California coincides with the filming of location scenes for "Psycho." Among the characters in this intriguing and ambiguous novel are a hunky bartender, his lovelorn mother, an innocent young woman aspiring to be a singer, Janet Leigh, and Alfred Hitchcock. Totally original work that dares to leave some questions unnervingly unanswered. — Alden Graves

The long-awaited first novel by the award-winning author of two impressive story collections explores the sinister side of desire in Bakersfield, California, circa 1959, when a famous director arrives to scout locations for a film about madness and murder at a roadside motel. Unfolding in much the same way that Hitchcock made Psycho—frame by frame, in pans, zooms, and close-ups—Mun~oz’s re-creation of a vanished era takes the reader into places no camera can go, venturing into the characters’ private thoughts, petty jealousies, and unrealized dreams. The result is a work of stunning originality.

Manuel Mun~oz’s short story collection, The Faith Healer of Olive Avenue, was a finalist for the Frank O’Connor International Short Story Award. He is the recipient of a National Endowment for the Arts literature fellowship and the prestigious Whiting Award, and is currently teaching creative writing at the University of Arizona in Tucson.

“‘I want to remind readers that books are better at haunting us than movies are,’ Mun~oz has said of his ambitions for What You see in the Dark. ‘Haunting’ is only the beginning of what his fine debut novel accomplishes. [It] strikes emotional chords so deep and with such precision, it almost makes you believe you’ve discovered a new art form.” —The Austin Chronicle

“The making of Alfred Hitchcock’s Psycho would seem out of place in a serious literary novel about small-town California . . . [But] Manuel Mun~oz pulls off this strange juxtaposition with stunning success . . . An audacious debut novel.” —The Cleveland Plain Dealer

“One of the cleverest suspense conceits I’ve encountered in a long time: two young lovers become entwined in a doomed affair, while, at the same time, Hitchcock and his minions begin setting up their equipment in sleepy bakersfield . . . This atmospheric tale of twisted minds and small-town murder would’ve put a demented gleam in The Master’s eye.” —Maureen Corrigan, NPR.org

“[A] stellar first novel . . . with a subtlety worthy of Hitchcock himself.” —Publishers Weekly, starred review