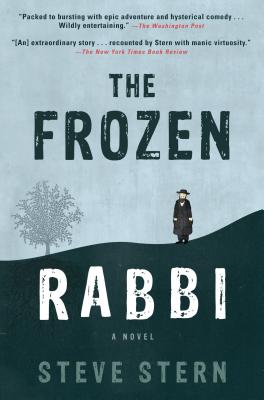 Teenage Bernie Karp inadvertently defrosts the body of a rabbi who's been kept in a block of ice by his family since 1889. Alternately serious and surreal, this exercise in black humor examines mysticism, belief and modern American values. A delightful read. — Louise Jones

“Packed to bursting with epic adventure and hysterical comedy, with grim poignancy and pointed satire, as Stern repeatedly shifts time and tone to craft a wildly entertaining tale.” —The Washington Post Book World

Award-winning novelist Steve Stern’s exhilarating epic recounts the story of how a nineteenth-century rabbi from a small Polish town ends up in a basement freezer in a suburban Memphis home at the end of the twentieth century. What happens when an impressionable teenage boy inadvertently thaws out the ancient man and brings him back to life is nothing short of miraculous.

Steve Stern, winner of the National Jewish Book Award, is the author of several previous novels and novellas. He teaches at Skidmore College in upstate New York.

A recent article in The Jewish Review of Books (Spring 2010) lamented the paucity of Jewish fantasy books. While there are no lions symbolizing deities, we now have The Frozen Rabbi. Eliezer ben Zephyr, a nineteenth century mystic, was in a meditative trance when bad weather struck, submerging him in a newly formed pond, where he froze. Bernie Karp is a twenty-first century teenager who discovers ben Zephyr in the freezer in his parents’ basement. When he questions his parents, he learns that the rabbi has been handed down through the family as a sort of talisman. An equally fierce storm hits Memphis, knocking out power, and when Bernie checks on the rabbi, he has defrosted.  The book starts with Bernie’s discovery of the rabbi, and proceeds in alternating chapters, catching the reading up on how the rabbi got to Bernie’s basement, then continuing with Bernie’s changing life and the Rabbi’s endeavors.  Rabbi ben Zephyr acquaints himself with modern society by watching television all day. He then decides that America is lacking spirituality and convinces Bernie’s father, an appliance salesman, to finance the rabbi’s “House of  Enlightenment,” where he will “peddle be-a-ti-tude,” and “also sell a few specialty items on the side—books and talismans, red string to ward off the evil eye, everything marked up and elegantly repackaged of course.”

Out of the most bizarre circumstances, things seem reasonable, and part of what makes this book so enjoyable is seeing how Mr. Stern gets his characters from one place to another and how the absurd starts to make sense.  Without giving away too much of this romp through modern Jewish history, the rabbi, suspended in ice is passed down, almost like a mesorah. “Yosl King of Cholera from Boibicz, who married Chava Babtcheh, her that died from giving birth to Salo that they called him Frostbissen, who married the sharp-tongued Basha Puah who begot in Lodz first the twins Yachneh and Yoyneh, who ran away to Palestine, then me, Jocheved, who begot in America with my poor husband Shmerl your father Ruben Karp, who was in the Yichud a holy terror before he got wed to his wife that was shlangbissen, snakebit after already she begot you…” The rabbi’s story starts in Eastern Europe, where he is adopted by Salo the iceman. The rabbi then arrives in America, and spends time on the Lower East Side of Manhattan. This part of the book was a little slow, as the scene is set for the next guardian of the rabbi.  Bernie learns more by reading his Grandpa Ruby’s diary, which includes a stint in the nascent state of Israel (for Ruby, not the rabbi). Once Ruby returns to Memphis with his orphan son, the past catches up with the present very quickly, with Ruby’s son Julius taking over the appliance business, marrying Yetta, and soon after fathering Bernie and his older sister, Madeline. How does the rabbi stay frozen all this time?  That’s the part of the plot that includes inventions, train transport, and contraband.

Most of all, this is a book about transformation and façade.  While the rabbi dresses the part and looks like an ancient grandfather, sex plays a major part in his outlook.  As he professes to bring spirituality to the masses, it is definitely a commercial venture that includes his memoir, The Ice Sage. Like his ancestor before, Jocheved, who transformed her outward appearance so the extent that it affected her internal working, Bernie also changes.  Like Grandpa Ruby, who was at the same time a fearless fighter and a social outcast, Bernie also lives on the edge. He grows from an overweight, apathetic teenager into one whose soul can leave his body and ascend to mystical heights. He researches Jewish history, learns Yiddish, and acquires a girlfriend, who is attracted to him for his ability to leave his body. By the end of the book, he feels comfortable in neither the physical nor the spiritual world, and while the epilogue is quite shocking, I couldn’t imagine this book being neatly wrapped up with a happy ending.While the idea of a rabbi frozen in the 1890’s defrosted  over a hundred years later is interesting in itself, the novel has much to offer. The main characters are developed well, and the alternation between third and first person gives perspective while allowing them to “speak for themselves.” There is a strong sense of place, particularly the Lower East Side of the turn of the century and in the graphic description of a pogrom in the shtetl. The language is what makes this more of an intimate history than a story, with the rabbi’s “yinglish” making him  sound both wise and wacky at the same time:  “So step kvetching and start yentzing [having sex]; this is my advice that I give to you free of charge.” Bernie, as an awkward teenager has little to say, but his internal moments chronicle his spiritual development. In more somber moments, the narration can be poetic, with “trees stooped like peddlers under haversacks of heavy snow.”  So, to paraphrase Rabbi Eliezer ben Zephyr, “This is heaven already on the planet of Earth. It’s all in the book…which it’s twenty-four ninety-five retail.”  Go and learn!

--Kathe Pinchuck, MLIS, has worked in both synagogue and public libraries. A frequent reviewer for the Association of Jewish Libraries Newsletter, she is past chair of the Sydney Taylor Book Award Committee.

“A funny, profound and virtuosic work . . . this fast-paced romp through history . . . is a rare enchantment.” —San Francisco Chronicle

“In the 25 years since [Stern] published his first book, younger Jewish writers have run with a similar shtick . . . In Jonathan Safran Foer, you see Stern’s fanciful English, in Nicole Krauss his magic realism, in Michael Chabon his updated golems and gun-toting shtarkers. But Stern was there first, and with The Frozen Rabbi it feels like he may be last too: this is a novel so rich, full, funny, dense and exhausting, it feels like there may be no more Steve Stern books left to write—by him, or anyone else.” —The Toronto Globe and Mail


“Among the wonders awaiting the reader of Steve Stern’s exuberant new novel . . . is one of sheer logistics: How did he get all of this in here? The book’s 370 pages are packed to bursting with epic adventure and hysterical comedy, with grim poignancy and pointed satire, as Stern repeatedly shifts time and tone to craft a wildly entertaining tale.” —The Washington Post Book World