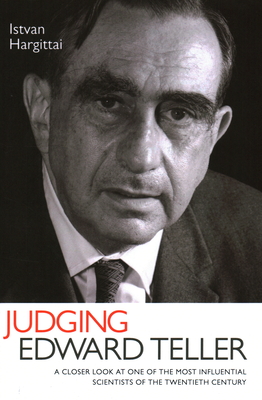 Many people know Edward Teller as the "Father of the H-Bomb." To his supporters he was a hero of the Cold War. To his detractors he was evil personified. Between these extremes was the life of the real man.

In this definitive and comprehensive biography, a personal acquaintance of Teller’s presents a balanced portrait of the multifaceted and enigmatic scientist against the backdrop of a turbulent period of history. Taking pains to avoid bias and preconceptions, thr author critically examines Teller’s personality, family background, and the experiences that guided his actions—correcting many of the myths that others and Teller himself promulgated.

Drawing for the first time on hitherto unknown archival material from Hungarian, American, and German sources, the author provides fresh insights that help the reader to understand Teller’s motivations, his relationships with friends and foes, and his driven personality. In addition to this research and his own memories of Teller, Hargittai has interviewed such prominent figures as Richard Garwin, Freeman Dyson, George A. Keyworth, and Wendy Teller (Edward Teller’s daughter), among others.

The author reviews the significant facets of Teller’s life: his Jewish-Hungarian origins, forced emigrations, brilliance in science, and devotion to the defense of the United States. He discusses Teller’s ruthless Machiavellism in achieving his goals, which included his pivotal role in the creation of the hydrogen bomb and the second weapons laboratory at Livermore, as well as his damaging testimony against physicist J. Robert Oppenheimer. Teller’s peers viewed this testimony as a betrayal and, in effect, sent him into internal exile, which Hargittai describes as more tormenting to him than his previous emigrations.

The author notes that Teller was sometimes called "a monomaniac with many manias," such as his fierce opposition to nuclear test bans during the Cold War and, toward the end of his life, his role as propagandist for the Strategic Defense Initiative. Yet, his very excesses may have in fact contributed to the demise of the Soviet Union.

Who was Edward Teller—the real "Dr. Strangelove," the driven crusader for the H-Bomb, the villain who destroyed Oppenheimer, or the devoted husband, loyal friend, patriot, and strongly idealistic scientist? This monumental work will reveal the contradictory nature of this complex man in all his strengths, flaws, and brilliance.

Istvan Hargittai PhD, DSc (Budapest, Hungary), is the author of the critically acclaimed Judging Edward Teller; the six-volume Candid Science series of interviews with famous scientists; The Road to Stockholm: Nobel Prizes, Science, and Scientists; The Martians of Science: Five Physicists Who Changed the Twentieth Century; and The DNA Doctor: Candid Conversations with James D. Watson. Dr. Hargittai is Research Professor at the Budapest University of Technology and Economics. He is a member of the Hungarian Academy of Sciences, a foreign member of the Norwegian Academy of Science and Letters, and a member of the Academia Europaea in London.

"Excellent. An interesting, thorough, and objective discussion of the life of Edward Teller, a brilliant but controversial scientist."
-Charles Townes, Nobel laureate, University of California at Berkeley

"A must read for those who wish an accurate accounting of Teller and his associates who led the free world into the nuclear era."
-Harold M. Agnew, former director of Los Alamos National Laboratory,
former chairman of the US General Advisory Committee ACDA

"Recommended for college and research libraries’ history of science collections and is highly recommended for lay readers with a penchant for science."
-Library Journal

'This is a fascinating and educational read. A particularly significant aspect of this text is the light it shines on the struggles and conflicts that ethics plays within science…This book would be a great choice for an advanced or secondary college class that integrates the history of science and physics."
-NSTA Recommends