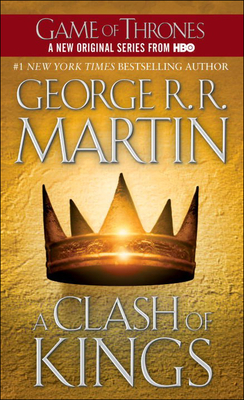 This is book number 2 in the Song of Ice and Fire series.

GAME OF THRONES: A NEW ORIGINAL SERIES, NOW ON HBO.
In this eagerly awaited sequel to "A Game of Thrones, " George R. R. Martin has created a work of unsurpassed vision, power, and imagination. "A Clash of Kings" transports us to a world of revelry and revenge, wizardry and warfare unlike any you have ever experienced.
A CLASH OF KINGS
A comet the color of blood and flame cuts across the sky. And from the ancient citadel of Dragonstone to the forbidding shores of Winterfell, chaos reigns. Six factions struggle for control of a divided land and the Iron Throne of the Seven Kingdoms, preparing to stake their claims through tempest, turmoil, and war. It is a tale in which brother plots against brother and the dead rise to walk in the night. Here a princess masquerades as an orphan boy; a knight of the mind prepares a poison for a treacherous sorceress; and wild men descend from the Mountains of the Moon to ravage the countryside. Against a backdrop of incest and fratricide, alchemy and murder, victory may go to the men and women possessed of the coldest steel...and the coldest hearts. For when kings clash, the whole land trembles.

George R.R. Martin sold his first story in 1971 and has been writing professionally since then. He spent ten years in Hollywood as a writer-producer, working on "The Twilight Zone, Beauty and the Beast, " and various feature films and television pilots that were never made. In the mid '90s he returned to prose, his first love, and began work on his epic fantasy series, A Song of Ice and Fire. He has been in the Seven Kingdoms ever since. Whenever he's allowed to leave, he returns to Santa Fe, New Mexico, where he lives with the lovely Parris, a big white dog called Mischa, and two cats named Augustus and Caligula, who think they run the place. "From the Hardcover edition."