Grandma Gatewood's Walk: The Inspiring Story of the Woman Who Saved the Appalachian Trail (Hardcover) 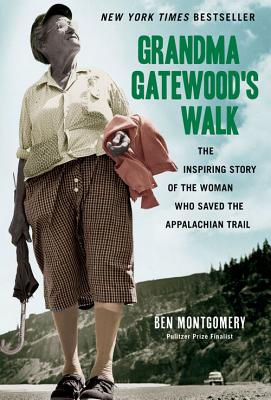 By Ben Montgomery
Call or email to see if a used copy is available.
Out of Print

Winner of the 2014 National Outdoor Book Awards for History/Biography Emma Gatewood told her family she was going on a walk and left her small Ohio hometown with a change of clothes and less than two hundred dollars. The next anybody heard from her, this genteel, farm-reared, 67-year-old great-grandmother had walked 800 miles along the 2,050-mile Appalachian Trail. And in September 1955, having survived a rattlesnake strike, two hurricanes, and a run-in with gangsters from Harlem, she stood atop Maine's Mount Katahdin. There she sang the first verse of "America, the Beautiful" and proclaimed, "I said I'll do it, and I've done it."Grandma Gatewood, as the reporters called her, became the first woman to hike the entire Appalachian Trail alone, as well as the first person--man or woman--to walk it twice and three times. Gatewood became a hiking celebrity and appeared on TV and in the pages of Sports Illustrated. The public attention she brought to the little-known footpath was unprecedented. Her vocal criticism of the lousy, difficult stretches led to bolstered maintenance, and very likely saved the trail from extinction.Author Ben Montgomery was given unprecedented access to Gatewood's own diaries, trail journals, and correspondence, and interviewed surviving family members and those she met along her hike, all to answer the question so many asked: Why did she do it? The story of Grandma Gatewood will inspire readers of all ages by illustrating the full power of human spirit and determination. Even those who know of Gatewood don't know the full story--a story of triumph from pain, rebellion from brutality, hope from suffering.

Ben Montgomery is a staff writer at the Tampa Bay Times and cofounder of the Auburn Chautauqua, a Southern writers' collective. He was a finalist for the Pulitzer Prize in 2010 and has won many other national writing awards.