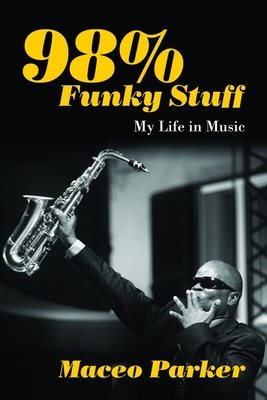 Maceo Parker’s signature style became the lynchpin of James Brown's band when he and his brother Melvin joined the Hardest Working Man in Show Business in 1964. That style helped define Brown’s brand of funk, and the phrase “Maceo, I want you to blow!”  became part of the lexicon of black music. He took time off from James Brown to play with George Clinton’s P-funk collective and with Bootsy’s Rubber Band; he also formed his own band, Maceo and All the King’s Men, whose records are cult favorites among funk aficionados.

Here Maceo tells his own warm and astonishing story, from his Southern upbringing to his career touring the world and playing to adoring fans. Maceo has long called his approach to the saxophone “2% jazz, 98% funky stuff.” Now, on the eve of Maceo’s 70th birthday, in prose as lively and funky as his saxophone playing, here is the definitive story of one of the funkiest musicians alive.

Maceo Parker is arguably the world’s most famous living saxophone player. Not only has he contributed to the success of some of the world’s most influential musicians—James Brown, George Clinton, Prince—but he has also enjoyed a blistering solo career for more than twenty-two years. He has collaborated with Ray Charles, Ani DiFranco, James Taylor, De La Soul, the Dave Matthews Band, the Red Hot Chili Peppers, and many others.

"An important addition to any library of black music biographies."  —DownBeat

"A breezy, anecdotal memoir by the funky saxophonist who reveals himself to be an uncommonly decent man."  —Kirkus Reviews

"Hipper than most 20-year-olds, [Parker] has more soul in his little finger than a roomful of Boyz II Men."  —Oakland Tribune

"Parker talks with his sax, chatters away without a seeming care. It's a musical antidepressant, an antidote to dark days."  —San Diego Reader

"Those familiar with Parker’s work as a world-class saxophonist will enjoy getting to know him a little better. If you’re not a fan, this will give you plenty of new music to dig into."  —Music Tomes