Sisters are Forever and Like an Eagle: An Anthology of Southern Historical Fiction (Paperback) 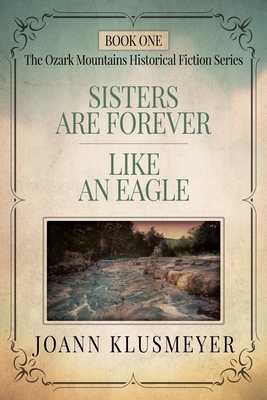 By Joann Klusmeyer
$16.45
IN WAREHOUSE - Usually Ships in 1-5 Business Days

- SOUTHERN HISTORICAL FICTION AT ITS BEST -

This wonderfully written historical fiction series captures the unforgettable struggles, dreams, failures, and triumphs of settler life in the Ozark mountains at the dawn of the 20th century. Life there was rugged and almost always unforgiving. The people and families who called these mountains and "Rivers Bend" home were of hardy stock. They experienced great hardships and suffering, but they were gritty, tough, and stubborn (and faithful) too-and they persevered against even the bleakest of odds. Their inspiring lives and stories remind us that suffering builds perseverance, and perseverance builds character, and character builds hope-and hope, blessed hope, never disappoints.

This seven-volume anthology series, with two authentically crafted novellas in each volume, was written by one whose parents lived in the Ozarks during this era. This series will grab your soul as it harkens back to an era of sacrifice and faith.

Sisters are Forever (A Novella)

Carl and Lorena Morgan decided that their five beautiful sons made a complete family. There was, however, a family situation that made them rethink their decision. The problem was, were they strong enough in their love of family to risk this preposterous thing? Only time would tell.

At the funeral, the preacher had promised that she could "rise up with wings like an eagle," but how could that be possible? Pregnant as she was and living on a thirteen-acre strip of hillside land, what hope was there for her and her seven children after a revenuer's bullet had taken her husband and the Law had "taken in" her oldest son? As she stirred the batter for the cornbread that would be supper for her children, she hoped she would be able, with help from above, to rise up like the cornbread she was preparing.

Ms. Joann Klusmeyer is the daughter of pioneer missionary parents. She grew up in rural Arkansas and learned and served in the little country church her father built and then pastored. Ms. Klusmeyer is a prolific author with over 50 titles to her credit (and counting).

Ms. Klusmeyer's historical fiction series, set between the 1880s and the 1920s, include The Burnt Tree Junction Series, The Ozark Mountain Series, Taming the Wilderness Series, The Sheltering Stones Series, and The Trilogy of Wishbone Hollow.