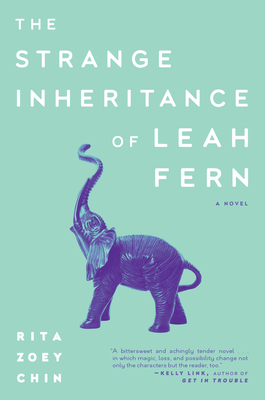 "The Strange Inheritance of Leah Fern is a bittersweet and achingly tender coming of age novel. Like V. E. Schwab and Audrey Niffenegger, Rita Zoey Chin is an expert guide to that territory in which magic, loss, and possibility change not only the characters but the reader, too.” - Kelly Link, author of Get in Trouble

The luminous story of a fiercely lonely young woman's quest to uncover the truth behind her mother’s disappearance . . .

When 6-year-old empath Leah Fern—once “The Youngest and Very Best Fortune Teller in the World”—is abandoned by her beautiful magician mother, she is consumed with longing for her mother's return.

Until something bizarre happens: On her 21st birthday Leah receives an inheritance from someone she doesn’t even know, and finds herself launched on a journey of magical discovery. It's a voyage that will spiral across the United States, Canada, into the Arctic Circle and beyond—and help her make her own life whole by piecing together the mystery surrounding her mother’s disappearance.

The Strange Inheritance of Leah Fern is an enchanting novel about the transcendent power of the imagination, the magic at the threshold of past and present, and the will it takes to love.

Rita Zoey Chin is the author of the widely praised memoir, Let the Tornado Come. She holds an MFA from the University of Maryland and is the recipient of a Katherine Anne Porter Prize, an Academy of American Poets Award, and a Bread Loaf scholarship.  She has taught at Towson University and at Grub Street in Boston. Her work has appeared in Guernica, Tin House, and Marie Claire. This is her first novel.

"Chin (Let the Tornado Come, 2014) delivers an endearing protagonist whose epic quest ends with a measure of closure and wonder about the magic embedded in the unknown." — Booklist, STARRED review

"Piling revelations atop otherworldly descriptions, the novel wields its uncanny enigmas in an unapologetic fashion...The Strange Inheritance of Leah Fern is an enchanting novel that embraces all of the magic that the world has to offer." — Foreword Reviews

“Exquisitely beautiful and eerily wise. Deeply philosophical yet full of magic . . . a work of literary excellence.” — The Southern Literary Review

"An emotional and cutting new voice in literature demands your attention, so get this book as soon as possible. And give a copy to every reader you know!" — Book Reporter

“Rarely does a novel come along that charms the reader from its very first page. Even rarer is the story that maintains its allure throughout and transports you to places you’ve never been. The Strange Inheritance of Leah Fern is one of those rarities, a book as magical as the characters it depicts. From a carnival in Alabama to a coven of witches (think Glinda) that travels from place to place, and even to points in an expansive Wiccan spiral, Rita Zoey Chin’s debut novel takes readers on an enchanting emotional journey that will leave you captivated to the very end.” — The Washington Independent Review of Books

"Chin has a sure hand in showing Leah’s transformation as she processes her childhood neglect and learns to open up...[she] reaches some admirable heights." — Publishers Weekly

"There is much to admire about the author's glittering imagination...traveling with Leah Fern and seeing the world through the eyes of an empath are enjoyable." — Kirkus Reviews

"The Strange Inheritance of Leah Fern is a bittersweet and achingly tender coming of age novel. Like V. E. Schwab and Audrey Niffenegger, Rita Zoey Chin is an expert guide to that territory in which magic, loss, and possibility change not only the characters but the reader, too.” — Kelly Link, author of Get in Trouble

"A book that captures such tenderness and longing, and one where the rhythm and enchantment of every sentence lures a reader into joining Leah's search, with plenty of rewards along the way." — Aimee Bender, national bestselling author of The Particular Sadness of Lemon Cake

"To read The Strange Inheritance of Leah Fern is to be transported into a world so luminescent and full of wonder, so infused with sorrow and hope and joy and magic, that I wish I could send a copy to everyone on Earth. Rita Zoey Chin's captivating debut novel is the best kind of enchantment--transformative and moving and full of untold delights." — Catherine Chung, Author of Forgotten Country and The Tenth Muse

"I was enchanted by this exquisitely written book and the fierce and lovable Leah Fern. Suffused with magic and longing, the novel casts its own tender and solitary light, as if etched on a frozen lake under a full moon. [Its strange glow won't quickly be forgotten.]" — Sharon Guskin, author of The Forgetting Time