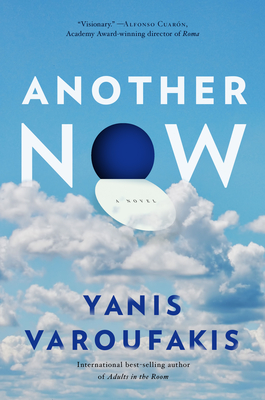 What would a fair and equal society actually look like? The world-renowned economist and bestselling author Yanis Varoufakis presents his radical and subversive answer in a work of speculative fiction that recalls William Morris and William Gibson

At a funeral for Iris, a revolutionary leftist feminist, Yango is approached by Costa, Iris’s closest comrade, who urges him to carry out Iris’s last wish: plough into her secret diaries to tell their story. “But”, Costa insists “leave out anything that might help Big Tech replicate my technologies!”

That night Yango delves into Iris’s diaries. In them he discovers a chronicle of how Costa’s revolutionary technologies had unveiled an actually existing, fully democratized, postcapitalist society. Suddenly he understands Costa’s obsession with the hackers trying to steal his secrets.

So begins Yanis Varoufakis’s extraordinary novelistic thought-experiment, where the world-famous economist offers an invigorating and deeply moving vision of an alternative reality.

Another Now tells the story of Costa, a brilliant but deeply disillusioned, computer engineer, who creates a revolutionary technology that will allow the user a “glimpse of a life beyond their dreams” but will not enslave them. But an accident during one of its trial runs unveils a cosmic wormhole where Costa meets his DNA double, who is living in a 2025 very different than the one Costa is living in.

In this parallel 2025 a global hi-tech uprising, begun in the wake of the collapse of 2008, has birthed a post-capitalist world in which work, money, land, digital networks and politics have been truly democratized. Banks have been eliminated, as well as predatory, data-mining digital monopolies; the gig economy is no more; and the young are free to experiment with different careers and to study ”non-lucrative topics, from Sumerian pottery to astrophysics.”

Intoxicated, Costa travels to England to tell Iris, his old comrade, and her neighbor, Eva, a recovering banker turned neoliberal economics professor, of the parallel universe he has discovered. Costa eventually leads them back to his workshop in America where Iris and Eva meet their own doubles, and confront hard truths about themselves and the daunting political challenge that "the Other Now" presents.

But, as their obsession with the Other Now deepens, time begins to run out, as the wormhole begins to deteriorate and hackers begin to unleash new attacks on Costa’s technology. The trio have to make a choice: which 2025 do they want to live in?

Varoufakis has been claiming for a while that we already live in postcapitalist times. That, since the 2008 crisis, capitalism has been morphing into technofeudalism. Another Now, a riveting work of speculative fiction, shows that there is a realistic, democratic alternative to the technofeudalpostcapitalist dystopia taking shape all around us. It also confronts us with the greatest question: how far are we willing to go to bring it about?

Yanis Varoufakis is the author of the bestseller Talking to My Daughter: A Brief History of Capitalism and two previous books, Adults in the Room, a memoir of his time as finance minister of Greece, and an economic history of Europe, And the Weak Suffer What They Must?, both of which were number one bestsellers.

Born in Athens in 1961, Yanis Varoufakis was for many years a professor of economics in Britain, Australia and the USA before he entered politics. He is co-founder of the international grassroots movement, DiEM25, and in 2019 won
election as one of its representatives in the Greek Parliament. He is currently Professor of Economics at the University of Athens.
yanisvaroufakis.eu / @yanisvaroufakis

"Varoufakis offers an alternative vision to what he brands Zuckerberg’s “Technofeudalist” nightmare... In offering a glimpse of how things might be different, Another Now invites us to contemplate possibilities that are not without their challenges, but worth entertaining nonetheless." -- PopMatters

"A landmark work ... A vision of a new society with new ways of thinking is possibly the most important thing an artist can offer at the moment." -- Brian Eno
"One of my few heroes. As long as people like Varoufakis are around, there still is hope." ―Slavoj Žižek

"I could not recommend this more. If you're looking for a sense of optimism, a sense of political possibility, this book is very important." -- Owen Jones

"I am enjoying Yanis Varoufakis's Another Now. The way we live is not inevitable" -- Jeannette Winterson

“Another Now takes us into a wormhole to an alternative present, not to marvel us with flying cars or barren cities, but to get a glimpse of a post-capitalistic world. Combining a provocative thought experiment with a deeply original sci-fi narrative, Yanis Varoufakis asks us to consider how humanity can ever balance freedom with fairness, allowing us to come to our own conclusions … the book is both visionary in its search for new possibilities and realistic in its embrace of the burdens, contradictions, and complexities of our human nature.” —Alfonso Cuarón, Academy Award-winning director of Roma

"There is something exciting, even invigorating, about envisioning this world alongside Varoufakis ... one finishes Another Now buzzing with a sense of possibility." ― The Monthly

"Another Now is structurally, ideologically and linguistically an extraordinary work." -- Zoe Williams

"I've absolutely loved reading [Another Now] ... the second I started reading it, it surprised and intrigued me." -- Matthew Taylor, RSA

"Another Now is not only a marvellously good read - it is a notable addition to the literature of social change." ― The Wire