How the Swans Came to the Lake: A Narrative History of Buddhism in America (Paperback) 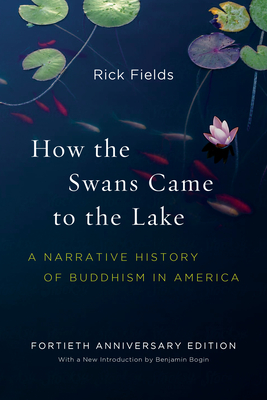 A modern classic unparalleled in scope, this sweeping history unfolds the story of Buddhism’s spread to the West.

How the Swans Came to the Lake opens with the story of Asian Buddhism, including the life of the Buddha and the spread of his teachings from India to Southeast Asia, China, Korea, Japan, Tibet, and elsewhere. Coming to the modern era, the book tracks how Western colonialism in Asia served as the catalyst for the first large-scale interactions between Buddhists and Westerners. Author Rick Fields discusses the development of Buddhism in the West through key moments such as Transcendentalist fascination with Eastern religions; immigration of Chinese and Japanese people to the United States; the writings of D. T. Suzuki, Alan Watts, and members of the Beat movement; the publication of Zen Mind, Beginner’s Mind by Shunryu Suzuki; the arrival of Tibetan lamas in America and Europe; and the influence of Western feminist and social justice movements on Buddhist practice.

This fortieth anniversary edition features both new and enhanced photographs as well as a new introduction by Fields’s nephew, Buddhist Studies scholar Benjamin Bogin, who reflects on the impact of this book since its initial publication and addresses the significant changes in Western Buddhist practice in recent decades.

RICK FIELDS (1942-1999) is the author of several books, including Chop Wood, Carry Water and The Code of the Warrior. He served as the editor of The Vajradhatu Sun, an international journal of Buddhism (now Lion’s Roar), and as the editor-at-large of Tricycle: The Buddhist Review.

BENJAMIN BOGIN, a scholar of Himalayan Buddhism, is associate professor and director of Asian Studies at Skidmore College. He is the author of The Illuminated Life of the Great Yolmowa and the coeditor of Himalayan Passages: Tibetan and Newar Studies in Honor of Hubert Decleer.

“Heroic in scope and of undeniable historic importance.”—Los Angeles Times

“This fascinating book delivers more than it promises. It takes the reader from the origins of Buddhism right up to the immediate past, through Buddhism’s growth and spread in Asia to the personalities that opened it up to the West and those that brought it to America as well as those who were affected by Buddhism or nurtured it here. Fields possesses a clear style and infectious enthusiasm for his subject.”—Library Journal

“The definitive treatment of the impact of Buddhism on American thought.”—Roderick Frazier Nash, Professor of History & Environmental Studies, University of California, Santa Barbara

“I found this engaging book literally crammed with the sort of lively and accurate information which I had for years been longing to find assembled. The leading characters emerge with a quality of independence and individuation that certainly dispels any stereotype of the Buddhist practitioner, teacher, or layman.”—Nancy Wilson Ross, The Washington Post