Even This I Get to Experience (CD-Audio) 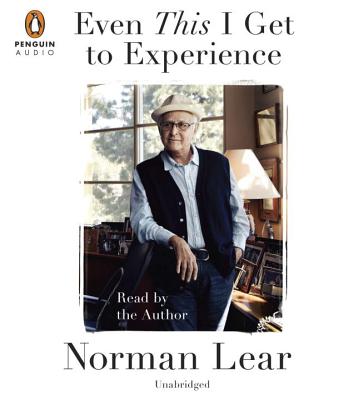 Only because the set was handy, I took these CDs to pass the time in the car, anticipating a self-aggrandizing Hollywood tell-all. Boy was I wrong! Lear, at 90-something, in his own clear voice, tells his rags-to-riches story in a charming, funny and self-deprecating way. From his miserable childhood, to harrowing WWII service as a fighter pilot in Italy, to the shocking anecdotes about Hollywood stars, to legions of world leaders he's met, I had no idea that he should be a legend in his own time. Beyond his graciousness, his insider's account of the evolution of the great, radical TV shows of the 60s and 70s is fascinating. So sad now, to have to travel without being able to listen to him spinning yarns. Read the book if you can't abide audio-books, it'll be just as inspiring. ~ Reviewed by Heather Bellanca — From Even This I Get to Experience

The dynamic and always controversial television producer shares fifty years of show business and politics, with all the candor and wisdom expected from the creator of All in the Family

The legendary creator of iconic television programs All in the Family, Sanford and Son, Maude, Good Times, The Jeffersons, and Mary Hartman, Mary Hartman, Norman Lear remade our television culture—while leading a life of unparalleled political, civic, and social involvement. Sharing the wealth of Lear’s ninety years, Even This I Get to Experience is a memoir as touching and remarkable as the life he has led.

In the nineteen seventies, Lear’s comedies were viewed by one hundred and twenty million people per week—yes, one hundred and twenty million— with stories that reflected the most serious issues of their lives and still left them howling. But before this, Lear led a charmed life throughout postwar Hollywood’s golden years, befriending the likes of Carl Reiner and Mel Brooks; writing and directing Frank Sinatra, Robert Redford, Dick Van Dyke, and Martha Raye; becoming the highest paid comic writer in the country while working for Jerry Lewis and Dean Martin. Not to mention, Lear flew some fifty bombing missions over Germany with the Fifteenth Air Force.

Shamelessly in love with the country the Founding Fathers laid out for him while his own father was serving time, Lear won the first American Legion Oratorical Contest speaking about the Constitution. He later founded People For the American Way, a national organization to protect the civil rights and liberties of us all, and bought an original copy of the Declaration of Independence, printed the night of July 4, 1776, not to hang on a wall in his home, but to travel across the country to schools, and libraries, and public institutions to be shared with citizens everywhere.

Married three times and the father of six children ranging from nineteen to sixty-eight, Lear’s penetrating look at family life, parenthood, and marriage is a volume in itself. Told with the charm and candor of one of the century’s greatest storytellers, Even This I Get To Experience is nothing less than a profound gift, endlessly readable and characteristically unforgettable.

NORMAN LEAR is the television producer of such groundbreaking sitcoms as All in the Family, Sanford and Son, One Day at a Time, The Jeffersons, Good Times, and Maude. He has received four Emmy awards, a Peabody, and the National Medal of Arts. As an advocate, Lear founded People for the American Way and supports First Amendment rights and other progressive causes.