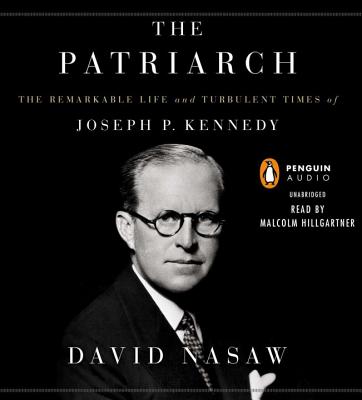 By David Nasaw, Malcolm Hillgartner (Read by)
$59.95
Hard to Find - May no longer be available

America's fascination with the Kennedys has lasted for a half-century. How odd that so little is known about the most fascinating Kennedy of them all...and what is known is so incomplete and often wrong. David Nasaw to the rescue. Scrupulously fair, exhaustively researched, and nearly impossible to put down. Riveting, surprising, and important. Highest Recommendation. — Bill Lewis

"Celebrated historian David Nasaw brings to life the story of Joseph Patrick Kennedy, in this, the first and only biography based on unrestricted and exclusive access to the Joseph P. Kennedy papers"

Joseph Patrick Kennedy whose life spanned the First World War, the Roaring Twenties, the Great Depression, the Second World War, and the Cold War was the patriarch of America's greatest political dynasty. The father of President John F. Kennedy and senators Robert and Edward Kennedy, Joe Kennedy was an indomitable and elusive figure whose dreams of advancement for his nine children were matched only by his extraordinary personal ambition and shrewd financial skills. Trained as a banker, Kennedy was also a Hollywood mogul, a stock exchange savant, a shipyard manager, the founding chairman of the Securities and Exchange Commission, and ambassador to London during the Battle of Britain. Though his incredible life encompasses the very heart of the American century, Joseph Kennedy has remained shrouded in rumor and prejudice for decades.

Drawing on never-before-published material from archives on three continents, David Nasaw the renowned biographer of Andrew Carnegie and William Randolph Hearst unearths a man far more complicated than the popular portrait. Was Kennedy an appeaser and isolationist, an anti-Semite and Nazi sympathizer, a stock swindler, a bootlegger, and a colleague of mobsters? Did he push his second son into politics and then buy his elections for him? Why did he have his daughter Rosemary lobotomized? Why did he oppose the Truman Doctrine, the Marshall Plan, the Korean War, and American assistance to the French in Vietnam? What was his relationship to J. Edgar Hoover and his FBI? How did he influence his son's politics and policies in the White House? In this groundbreaking biography Nasaw ignores the tired old answers surrounding Kennedy, starting from scratch to discover the truth behind this misunderstood man.

Though far from a saint, Joseph Kennedy in many ways exemplifies the best in American political, economic, and social life. His rags-to-riches story is one of exclusion and quiet discrimination overcome by entrepreneurship, ingenuity, and unshakable endurance. Kennedy's story deserves to be told in full, with no holds barred, and Nasaw's magnificent "The Patriarch "is the first book to do so.

DAVID NASAW is the author of "Andrew Carnegie, "which was a "New York Times "Notable Book of the Year and a finalist for the Pulitzer Prize, and "The Chief: The Life of William Randolph Hearst, "a finalist for the National" "Book Critics Circle Award for Biography and winner" "of the Bancroft Prize in History. He is the Arthur M." "Schlesinger, Jr. Professor of History at the Graduate" "Center of the City University of New York.