Winter of the World: Book Two of the Century Trilogy (CD-Audio) 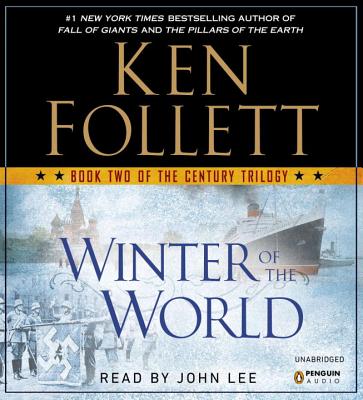 Ken Follett follows up his #1 New York Times bestseller Fall of Giants with a brilliant, page-turning epic about the heroism and honor of World War II, and the dawn of the atomic age.

Ken Follett’s Fall of Giants, the first novel in his extraordinary new historical epic, The Century Trilogy, was an international sensation, acclaimed as “sweeping and fascinating, a book that will consume you for days or weeks” (USA Today) and “grippingly told and readable to the end” (The New York Times Book Review). “If the next two volumes are as lively and entertaining as Fall of Giants,” said The Washington Post, “they should be well worth waiting for.”

Winter of the World picks up right where the first book left off, as its five interrelated families—American, German, Russian, English, Welsh—enter a time of enormous social, political, and economic turmoil, beginning with the rise of the Third Reich, through the Spanish Civil War and the great dramas of World War II, up to the explosions of the American and Soviet atomic bombs.

Carla von Ulrich, born of German and English parents, finds her life engulfed by the Nazi tide until she commits a deed of great courage and heartbreak. . . . American brothers Woody and Chuck Dewar, each with a secret, take separate paths to momentous events, one in Washington, the other in the bloody jungles of the Pacific. . . . English student Lloyd Williams discovers in the crucible of the Spanish Civil War that he must fight Communism just as hard as Fascism. . . . Daisy Peshkov, a driven American social climber, cares only for popularity and the fast set, until the war transforms her life, not just once but twice, while her cousin Volodya carves out a position in Soviet intelligence that will affect not only this war—but the war to come.

These characters and many others find their lives inextricably entangled as their experiences illuminate the cataclysms that marked the century. From the drawing rooms of the rich to the blood and smoke of battle, their lives intertwine, propelling the reader into dramas of ever-increasing complexity.

As always with Ken Follett, the historical background is brilliantly researched and rendered, the action fast-moving, the characters rich in nuance and emotion. With passion and the hand of a master, he brings us into a world we thought we knew, but now will never seem the same again.

Ken Follett burst into the book world with Eye of the Needle, an award-winning thriller and international bestseller. After several more successful thrillers, he surprised everyone with The Pillars of the Earth and its long-awaited sequel, World Without End, a national and international bestseller. Follett's new, magnificent historical epic, The Century Trilogy, opened with the bestselling Fall of Giants. He lives in England with his wife, Barbara.