Hikikomori and the Rental Sister (CD-Audio) 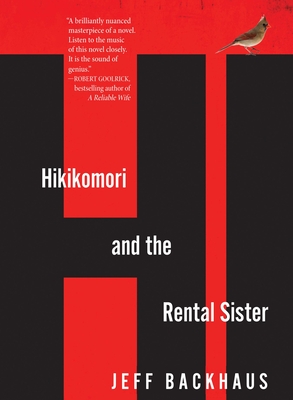 After a tragedy, Thomas Tessler withdraws from his wife and closes himself in his bedroom. The Japanese call this Hikikomori. His wife hires a young Japanese woman, called a "rental sister," to rescue him. A beautifully written novel about grief, intimacy and dealing with emotions. — Sarah Knight

“Thomas Tessler is 'hikikomari,' secluded, isolated, and depressed, a father so filled with guilt and shame he feels his only option is to lock himself in his bedroom and avoid all human contact. Thomas's wife, Silke, forced to communicate with her husband through a locked door, is desperate to save her marriage. She enlists the services of Megumi, a Japanese 'rental sister.' Her job is to break through Thomas's wall of isolation. Backhaus does a wonderful job of exploring how these three defeated people reach out to one another and begin the work of healing.”
— Beverly Bartczak, The Fine Print, Lakeside, OH

Thomas Tessler, devastated by a tragedy, has cloistered himself in his bedroom and shut out the world for the past three years. His wife, Silke, lives in the next room, but Thomas no longer shares his life with her, leaving his hideout only in the wee hours of the night to buy food at the store around the corner from their Manhattan apartment. Isolated, withdrawn, damaged, Thomas is hikikomori.

Desperate to salvage their life together, Silke hires Megumi, a young Japanese woman attuned to the hikikomori phenomenon, to lure Thomas back into the world. In Japan Megumi is called a “rental sister,” though her job may involve much more than familial comforts. As Thomas grows to trust Megumi, a deepening and sensual relationship unfolds. But what are the risks of such intimacy? And what must these three broken people surrender in order to find hope?

Revelatory and provocative, Hikikomori and the Rental Sister tears through the emotional walls of grief and delves into the power of human connection to break through to the waiting world outside.

Jeff Backhaus has been a cook, an art director, and a professional pilot. He lived and worked in Korea and now lives in New York. Author website: www.jeffbackhaus.com.

STEPHEN BOWLBY earned his BA in Speech & Theater at Westminster College in Pennsylvania, a short trip from his native North Jersey. His career quickly moved from commercial radio into television and film production as a writer, editor, and director with voice work ever present. With more than 35 years’ experience he’s expanded into audiobook performance, studying with such industry greats as Pat Fraley, Scott Brick, and Stefan Rudnicki.

“[A] quiet but poignant exploration of loneliness and self-discovery.”
—USA Today

“Stephen Bowlby’s use of an unemotional voice for narrator Thomas captures the tone of this quirky, spare story of loneliness, grief, and love. . . . With this debut, Backhaus proves he is an author to watch. Recommended.”
—Library Journal