The Pig Comes to Dinner (CD-Audio) 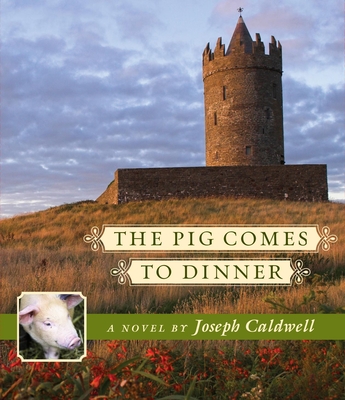 This sequel to "The Pig Did It" continues the frolic and fascination. Packed with Irish whimsy with tender attention to the characters and the rich history of the region, this novel gallops along with a sigh and a lilt, capturing the reader with delightful dialogue and a great story. — Karen Frank

“This sequel to The Pig Did It lives up to and continues the frolic and fascination of its predecessor. Packed with Irish whimsy and tender attention to both the characters and the rich history of the region, this novel gallops along with a sigh and a lilt and captures the reader with delightful dialogue and a great story.”
— Karen M. Frank, Northshire Bookstore, Manchester Center, VT

Enjoy a “second helping” from the obstreperous creature that romped so riotously through The Pig Did It with this sequel The Pig Came to Dinner.

All of the charming characters of the previous story are also present again: Kitty McCloud and her new husband/former blood enemy Kieran Sweeney have bought an ancient Irish castle with the profits from Kitty’s popular revisions of classic novels like Jane Eyre. Kitty’s American cousin, Aaron McCloud, has arrived to visit with his new wife, the former swineherd Lolly McKeever. With them is a troublesome and unwelcome pig, a wedding gift they are redelivering to Kitty and Kieran.

But over the resulting lighthearted discord hangs a weightier problem: Kitty’s new home is inhabited by a pair of ghosts from out of the castle’s troubled past. How this haunting couple is dealt with serves only to embellish the allure and humor of Mr. Caldwell’s uniquely theatrical storytelling.

JOSEPH CALDWELL is a playwright and novelist who has been awarded the Rome Prize for Literature by the American Academy of Arts and Letters. He is the author of five novels in addition to the Pig Trilogy. He began writing the trilogy when he was a volunteer in a hospital during the AIDS epidemic. Realizing his work could get no darker, he had to lighten up. Caldwell lives in New York City.

CHRIS PATTON began his career in stage performance but later found his true calling in voice over.  In addition to his work narrating audiobooks, Chris has also voiced over 160 animated titles, and numerous national and regional commercials.  He has appeared at over seventy-five pop culture conventions internationally to discuss his craft and interact with fans of his expansive fan base.

“This charming, at times hilarious tale serves as a satisfying story as well as a quiet commentary on the sympathetic relationship between imagination and compassion.”
—School Library Journal

“Humor and sadness, the past and the present, all live side-by-side.”
—Publishers Weekly

“Irish to the core, [Caldwell’s trilogy] speaks to all of humanity . . . with a heart as wide as an Irish smile and a drollness that would be welcome in many a pub.”
—Richmond Times-Dispatch