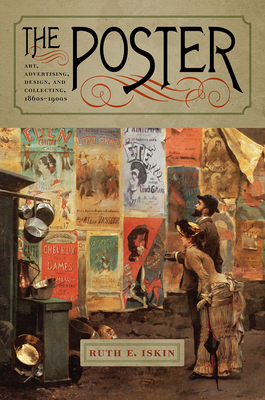 The Poster: Art, Advertising, Design, and Collecting, 1860s–1900s is a cultural history that situates the poster at the crossroads of art, design, advertising, and collecting. Though international in scope, the book focuses especially on France and England. Ruth E. Iskin argues that the avant-garde poster and the original art print played an important role in the development of a modernist language of art in the 1890s, as well as in the adaptation of art to an era of mass media. She moreover contends that this new form of visual communication fundamentally redefined relations between word and image: poster designers embedded words within the graphic, rather than using images to illustrate a text. Posters had to function as effective advertising in the hectic environment of the urban street. Even though initially commissioned as advertisements, they were soon coveted by collectors. Iskin introduces readers to the late nineteenth-century “iconophile”—a new type of collector/curator/archivist who discovered in poster collecting an ephemeral archaeology of modernity. Bridging the separation between the fields of art, design, advertising, and collecting, Iskin’s insightful study proposes that the poster played a constitutive role in the modern culture of spectacle. This stunningly illustrated book will appeal to art historians and students of visual culture, as well as social and cultural history, media, design, and advertising.

RUTH E. ISKIN is an associate professor of art history in the Department of the Arts at Ben-Gurion University of the Negev. She is the author of Modern Women and Parisian Consumer Culture in Impressionist Painting.