Fetch the Devil: The Sierra Diablo Murders and Nazi Espionage in America (Hardcover) 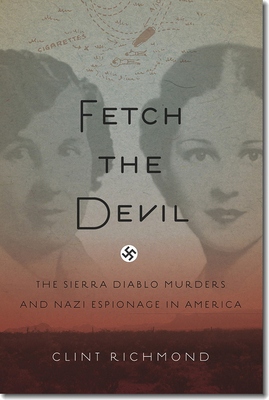 Torture, murder, intrigue, deception, and Nazis. What mystery lover could ask for anything more? Richmond's riveting book is about the Sierra Diablo murders in 1937. The wife and daughter of an executive in the explosives industry were found shot to death in the Texas desert. A meticulous recreation of the crime and the exhaustive hunt for the killers. — Alden Graves

In 1938, Hazel Frome, the wife of a powerful executive at Atlas Powder Company, a San Francisco explosives manufacturer, set out on a cross-country motor trip with her twenty-three-year-old daughter, Nancy. When their car broke down in El Paso, Texas, they made the most of being stranded by staying at a posh hotel and crossing the border to Juarez for shopping, dining, and drinking. A week later, their near-nude bodies were found in the Chihuahuan Desert. Though they had been seen on occasion with two mystery men, there were no clues as to why they had apparently been abducted, tortured for days, and shot execution style. El Paso sheriff Chris Fox, a lawman right out of central casting, engaged in a turf war with the Texas Rangers and local officials that hampered the investigation. But the victims’ detours had placed them in the path of a Nazi spy ring operating from the West Coast to Latin America through a deep-cover portal at El Paso. The sleeper cell was run by spymasters at the German consulate in San Francisco. In 1938, only the inner circle of the Roosevelt White House and a few FBI agents were aware of the extent to which German agents had infiltrated American industry. Fetch the Devil is the first narrative account of this still officially unsolved case. Based on long forgotten archives and recently declassified FBI files, Richmond paints a convincing portrait of a sheriff’s dogged investigation into a baffling murder, the international spy ring that orchestrated it, and America on the brink of another world war.

CLINT RICHMOND is a former newspaper reporter and magazine writer. He is the author of The Good Wife, Red Star Rogue, Selena, and other works of nonfiction. He lives in Texas.