Toms River: A Story of Science and Salvation (Paperback) 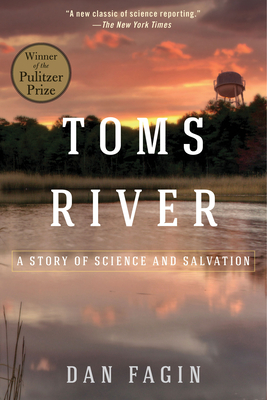 
The true story of a small town ravaged by industrial pollution, Toms River won the 2014 Pulitzer Prize and has been hailed by The New York Times as "a new classic of science reporting." Now available in paperback with a new afterword by acclaimed author Dan Fagin, the book masterfully blends hard-hitting investigative journalism, scientific discovery, and unforgettable characters.

One of New Jersey’s seemingly innumerable quiet seaside towns, Toms River became the unlikely setting for a decades-long drama that culminated in 2001 with one of the largest environmental legal settlements in history. For years, large chemical companies had been using Toms River as their private dumping ground, burying tens of thousands of leaky drums in open pits and discharging billions of gallons of acid-laced wastewater into the town’s namesake river. The result was a notorious cluster of childhood cancers scientifically linked to local air and water pollution.

Fagin recounts the sixty-year saga of rampant pollution and inadequate oversight that made Toms River a cautionary tale. He brings to life the pioneering scientists and physicians who first identified pollutants as a cause of cancer and the everyday people in Toms River who struggled for justice: a young boy whose cherubic smile belied the fast-growing tumors that had decimated his body from birth; a nurse who fought to bring the alarming incidence of childhood cancers to the attention of authorities who didn’t want to listen; and a mother whose love for her stricken child transformed her into a tenacious advocate for change.

Rooted in a centuries-old scientific quest, Toms River is an epic of dumpers at midnight and deceptions in broad daylight, of corporate avarice and government neglect, and of a few brave individuals who refused to keep silent until the truth was exposed.

Dan Fagin is an associate professor of journalism and the director of the Science, Health, and Environmental Reporting Program at New York University’s Arthur L. Carter Journalism Institute. His work has been recently published in Nature, The New York Times, Scientific American, and Slate and he is also the co-author of Toxic Deception. Visit danfagin.com for more information.

"It's high time a book did for epidemiology what Jon Krakauer's best-selling Into Thin Air did for mountain climbing: transform a long sequence of painfully plodding steps and missteps into a narrative of such irresistible momentum that the reader not only understands what propels enthusiasts forward, but begins to strain forward as well, racing through the pages to get to the heady views at the end. And such is the power of Dan Fagin's Toms River, surely a new classic of science reporting. . . a sober story of probability and compromise, laid out with the care and precision that characterizes both good science and great journalism."
— New York Times

"Immaculate research . . . unstoppable reading . . . Fagin's book may not endear him to Toms River's real estate agents, but its exhaustive reporting and honest look at the cause, obstacles, and unraveling of a cancerous trail should berequired environmental reading."
— Philadelphia Inquirer

"If you have but a single new book to read, let this be the one. Its per­sonalities, depth, and driving, de­tective-story-like narrative are as grip­ping as anything in recent memory."
— Environmental Forum

"Fagin's meticulously researched and compellingly recounted story of Toms River families struggling to find out what was causing the cancers that claimed their children belongs on the shelf with other environmental/medical mysteries. It's every bit as important—and as well-written—as A Civil Action and The Immortal Life of Henrietta Lacks."
— The Star-Ledger

"Absorbing and thoughtful."
— The USA Today

"This hard-hitting account of cancer epidemiology in the New Jersey town of Toms River is a triumph."
— Nature

"In an account equal parts sociology, epidemiology, and detective novel, veteran environmental journalist Dan Fagin chronicles the ordeal of this quiet coastal town, which for decades was a dumping ground for chemical manufacturers. Fagin's compelling book raises broader questions about what communities are willing to sacrifice in the name of economic development."
— Mother Jones

"This book stood out for its superb combination of compelling narrative and for its explanations of science and history....This thought-provoking work speaks to how the tragic tale of Toms River can happen—and is happening—other places."
— Society of Environmental Journalists Rachel Carson Book Award judging panel

"Dan Fagin spent seven years investigating and writing the tale that is Toms River, and its Pulitzer Prize and more than 500 pages are a suitably epic testimony to those who fought for decades to bring justice to their town."
— Resurgence & Ecologist

"A thrilling journey through the twists and turns of cancer epidemiology, Toms River is essential reading for our times. Dan Fagin handles topics of great complexity with the dexterity of a scholar, the honesty of a journalist, and the dramatic skill of a novelist."
— Siddhartha Mukherjee, M.D., author of the Pulitzer Prize-winning "The Emperor of All Maladies: A Biography of Cancer"

"[Fagin] does a superb job of investigative research in documenting this story, one that is well worth preserving...highly recommended."
— Electronic Green Journal

"Toms River is an epic tale for our chemical age. Dan Fagin has combined deep reporting with masterful storytelling to recount an extraordinary battle over cancer and pollution in a New Jersey town. Along the way—as we meet chemists, businessmen, doctors, criminals, and outraged citizens—we see how Toms River is actually a microcosm of a world that has come to depend on chemicals without quite comprehending what they might do to our health."
— Carl Zimmer, author of "A Planet of Viruses" and "Parasite Rex"

"At once intimate and objective, Toms River is the heartbreaking account of one town's struggle with a legacy of toxic pollution. Dan Fagin has written a powerful and important book."
— Elizabeth Kolbert, author of "Field Notes from a Catastrophe"

"Waterborne destruction has visited Toms River before, albeit via less conspicuous channels, which Dan Fagin traces with marvelous precision in his new book, Toms River: A Story of Science and Salvation."
— New Yorker

"Fagin's meticulously researched and compellingly recounted story of Toms River families struggling to find out what was causing the cancers that claimed their children belongs on the shelf with other environmental/medical mysteries. It's every bit as important—and as well-written— as A Civil Action and The Immortal Life of Henrietta Lacks."
— Newark Star-Ledger

"Deeply and thoroughly researched, it's a gripping, beautifully told, and thought-provoking account of a human tragedy. It also presents a fine history of a number of science and health-related topics that bear directly on the story that unfolds in the Toms River. Fagin is a gifted storyteller."
— Chemical & Engineering News

"Toms River is absolutely riveting. I couldn't put it down. Dan Fagin has crafted a book about the consequences of industrial pollution that reads like a murder mystery. Read this book and the next time someone complains about too many environmental regulations you'll have clear answers for why government oversight of industrial waste production and disposal is so important."
— Richard Besser, MD, chief health and medical editor, ABC News, former acting director, CDC

"It’s a sure bet to keep you engrossed the whole way through. It’s got to be the best nonfiction book I’ve read since “A Civil Action” (1995)."
— Free Lance-Star