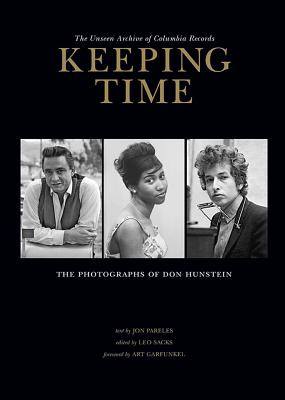 A fantastic collection of historical photos from the Columbia Records vault. Luminaries such as Bob Dylan, Johnny Cash, and Simon & Garfunkel, are featured in candid photos from their time in the recording studio, as well as unused photos from various promotional shoots. — Chris Linendoll

Don Hunstein’s images of music’s most influential artists are unforgettable. As Columbia Records’ staff photographer for more than four decades, Hunstein earned the trust and confidence of the most celebrated singers, songwriters, composers, and musicians of our time, including Bob Dylan, Miles Davis, Johnny Cash, Simon & Garfunkel, Aretha Franklin, Leonard Bernstein, Dave Brubeck, Tony Bennett, and Thelonious Monk, to name a few. Hunstein photographed these greats with noticeable informality, demonstrating a perpetual ease with his subjects. With his relaxed approach, he was able to glean private moments from public lives filled with fascinating, telling, and intimate details. Logging his daily assignments, Hunstein created an archive of profound images that parallel the soundtracks to our lives. To this day, his work exists as a unique record chronicling the creative efforts and energies of the world’s greatest musicians. Edited by journalist and Grammy®-nominated music producer Leo Sacks and with text by New York Times chief popular music critic Jon Pareles, Keeping Time places Hunstein’s photos in the context of musical and social change, adding an untold chapter to the cultural history of the second half of the twentieth century.

Jon Pareles is the chief popular music critic of the New York Times, a former music editor at Rolling Stone and the Village Voice, and the consulting editor of the Rolling Stone Encyclopedia of Rock & Roll. He lives in New York, New York.

Leo Sacks is a Grammy®-nominated music producer who has helped to preserve the legacies of Aretha Franklin, Marvin Gaye, Earth, Wind & Fire, Bill Withers, Luther Vandross and Philadelphia International Records. He is also a broadcast news journalist for NBC Nightly News, and is making a documentary about the New Orleans gospel artist Raymond Myles.

A collection of gorgeous, never-before-seen photos from the Columbia Records archive, Keeping Time illustrates Hunstein’s ability to capture artists relaxing and being themselves.”BookPage

an irresistible and thrilling retrospective collection of black-and-white photographs documenting performances and historic recording sessions and capturing unique glimpses into the personalities of original and influential musiciansAs for Hunstein, he modestly shrugs off the aesthetic, psychological, even metaphorical dimensions of his keenly observant and strongly composed photographs, explaining "I just did my job." Well said. But these portraits of artists at work are, without question, works of art.”Booklist

In today's celebrity-obsessed world, most images of stars tend to be contrived, taken in controlled environments. The paparazzi would love the access Don Hunstein enjoyed for decades Keeping Time is a trove of mostly unseen and intimate black and white images of jazz, rock, soul, and classical greats who recorded on the Columbia label.” BBC News Magazine

when I pick up a photo book, I want the images to do the lifting Keeping Time: The Photographs of Don Hunstein, a wonderful new retrospective from Insight Editions, accomplishes exactly that this coffee table must-have is all meat and potatoes, showcasing the mostly unseen and intimate images of Hunstein, who spent three decades as Columbia Records' official photographer.”Mother Jones