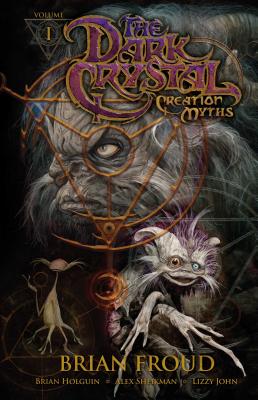 A lone wanderer, exotically dressed, stokes a fire and spins an epic tale of adventure, betrayal, and tragedy. It is the legend of Aughra, the world's benevolent guardian, and her impish son Raunip. It is the story of the gentle Gelfling, and the rise and fall of their race. It is the saga of the Urskeks, powerful alien visitors who arrive in peace, but who also harbor a dire secret. But most of all, it is the myth of the Bright Crystal, and how its healing light is ultimately corrupted in darkness.

Brian Froud, the legendary conceptual designer of the classic Jim Henson fantasy film The Dark Crystal, returns to the world he helped create in this first chapter of a trilogy of graphic novels. Featuring plots, character designs, and art direction by Froud, with breathtaking illustrations by Alex Sheikman (Robotika) and Lizzy John (Fraggle Rock), The Dark Crystal: Creation Myths is an incredible exploration of one of the most loved fantasy worlds of all time, and a tribute to the creative genius of Jim Henson's original film.

James Maury "Jim" Henson (September 24, 1936 – May 16, 1990) was an American puppeteer, artist, cartoonist, Imagineer, inventor, screenwriter, film director and producer, best known as the creator of The Muppets. As a puppeteer, Henson performed in various television programs, such as Sesame Street and The Muppet Show, films such as The Muppet Movie and The Great Muppet Caper, and created advanced puppets for projects like Fraggle Rock, The Dark Crystal, and Labyrinth. He was also an Academy Award-nominated film director (for his short film Time Piece), Emmy Award-winning television producer, and the founder of The Jim Henson Company, the Jim Henson Foundation, and Jim Henson's Creature Shop. Brian Froud is known worldwide as the preeminent faery artist of our time. He has published over twenty-five books, including the best selling Faeries, Lady Cottington’s Pressed Faery Book, and many more. Brian and his wife Wendy have just Trolls, a major hardcover book published by Abrams Books. Brian worked with Jim Henson for many years and was the designer for the iconic films The Dark Crystal and Labyrinth. Brian’s art is represented in collections throughout the world and can be seen at Amazing Fine Art in New York. Born in the USSR, Alex Sheikman immigrated to the US at the age of 12 and shortly thereafter discovered comic books. Since then, he has contributed illustrations to a variety of role playing games published by White Wolf, Holistic Design, and Steve Jackson Games. He is also the writer and artist of Robotika, Robotika: For a Few Rubles More, Moonstruck and a number of short stories. He lives in Northern California.