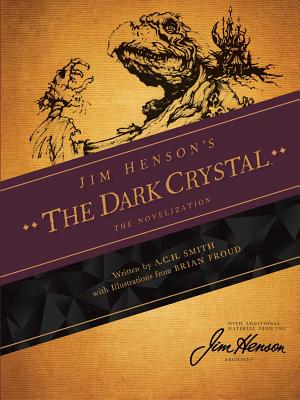 By Jim Henson (Other primary creator), A.C.H. Smith, Brian Froud (Illustrator)
$19.99
Hard to Find - May no longer be available

The adaptation of Jim Henson's cult classic film, The Dark Crystal, finally back in print in a new deluxe format!

Finally back in print and for the first time in hardcover, the novelization of The Dark Crystal adapted by A.C.H. Smith and personally overseen by Jim Henson, features an exclusive peek into Jim Henson’s creative process with over twenty never-before-seen pages of his detailed notes on an early draft of the adaptation. This beautiful hardcover includes illustrations and concept designs by legendary illustrator and concept artist Brian Froud (The Goblins of Labyrinth, Faeries) that have never been published.

James Maury "Jim" Henson was an American puppeteer, artist, cartoonist, Imagineer, inventor, screenwriter, film director and producer, best known as the creator of The Muppets. As a puppeteer, Henson performed in various television programs, such as Sesame Street and The Muppet Show, films such as The Muppet Movie and The Great Muppet Caper, and created advanced puppets for projects like Fraggle Rock, The Dark Crystal, and Labyrinth. He was also an Academy Award-nominated film director (for his short film Time Piece), Emmy Award-winning television producer, and the founder of The Jim Henson Company, the Jim Henson Foundation, and Jim Henson's Creature Shop. A.C.H. Smith was born in 1935 in Kew, Surrey, England as Anthony Charles Smith. He is a writer and actor, known for Cinema Club (1976), Gallery (1970) and Horse (1964). He has been married to Allison Smith since 1963. They have three children.