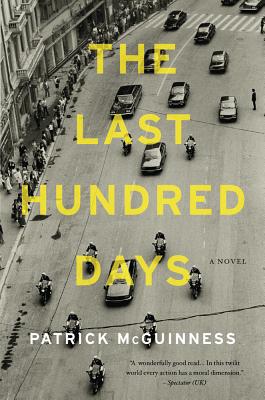 By Patrick McGuinness
Call or email to see if a used copy is available.
Out of Print

A young academic witnesses the rotting madness of Ceausescu's Romania firsthand in this crackling novel. Based on McGuinness' own experiences, Days has a paranoid atmosphere reminiscent of Graham Greene at his best. — Charles Bottomley

Once the gleaming "Paris of the East," Bucharest in 1989 is a world of corruption and paranoia, in thrall to the repressive regime of Nicolae Ceausescu. Old landmarks are falling to demolition crews, grocery shelves are empty, and informants are everywhere. Into this state of crisis, a young British man arrives to take a university post he never interviewed for. He is taken under the wing of Leo O'Heix, a colleague and master of the black market, and falls for the sleek Celia, daughter of a party apparatchik. Yet he soon learns that in this society, friendships are compromised, and loyalty is never absolute. And as the regime's authority falters, he finds himself uncomfortably, then dangerously, close to the eye of the storm.

Patrick McGuinness was born in Tunisia in 1968 and lived in Bucharest in the years leading up to the Romanian revolution. He is a professor of French and comparative literature at Oxford University and a fellow of St. Anne's College. As a poet, he has won an Eric Gregory Award and Poetry magazine's Levinson Prize. His latest collection, Jilted City, was a Poetry Book Society Recommendation. McGuinness lives between Oxford and North West Wales. His web site is www.patrickmcguinness.org.uk.

Longlisted for the 2011 Man Booker Prize

"Observant, reflective, witty and precise . . . Combining the essayistic, the lyrical, the humorous and the aphoristic, sometimes within a single paragraph." - New York Times

"A wonderfully good read... In this twilit world every action has a moral dimension" - Spectator

"An unfurling narrative, with its cast of impressively drawn characters, that is almost Tolstoyan in scope... McGuinness is an accomplished poet and writes with superb clarity... and his observations have the unmistakable scent of authenticity. This is a novel that rages and flows by turns, but rarely disappoints." - Independent

"[Christopher] Isherwood's Berlin novels come to mind... [McGuinness] offers something more complicit and more skeptical about its own objectivity, a glimpse of the moment when Romania's cold war began to thaw" - Observer

"An ambitious work... The sardonic crispness and evocative power of the language distinguish it from the run of contemporary fiction" - Times Literary Supplement