Prophet's Prey: My Seven-Year Investigation Into Warren Jeffs and the Fundamentalist Church of Latter-Day Saints (Paperback) 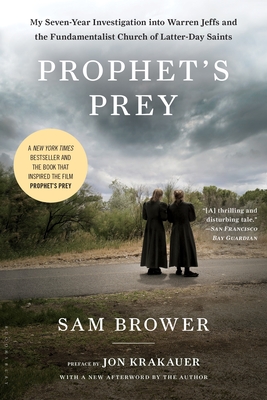 The Fundamentalist Church of Latter Day Saints was an offshoot of the Mormon religion that was established when the Mormons rejected the practice of polygamy. Prophet's Prey details the sordid -- some might even suggest inevitable -- result. The FLDS degenerated into a sophisticated criminal organization overseen by a man named Warren Jeffs, who manged to accumulate millions of dollars and over eighty wives, some of them as young as twelve. Brower made it his job for seven years to bring Jeffs and his hypocritical church hierarchy to justice. — Alden Graves

From the private investigator who cracked open the case that led to the conviction of Warren Jeffs, the maniacal prophet of the polygamous Fundamentalist Church of Latter Day Saints (FLDS), comes the page-turning, horrifying story of how a rogue sect used sex, money, and power disguised under a facade of religion to further criminal activities and a madman's vision.

In Prophet's Prey, Brower implicates Jeffs in his own words, bringing to light the contents of Jeffs's personal priesthood journal, discovered in a hidden underground vault, and revealing to readers the shocking inside world of FLDS members whose trust he earned and who showed him the staggering truth of their lives.

Private detective Sam Brower is the investigator who pushed forward the long and hard legal battles against the radical FLDS and Warren Jeffs. Raised in the Mormon Church (mainstream LDS), he lives in Cedar City, Utah. Visit his website at www.prophetsprey.com.