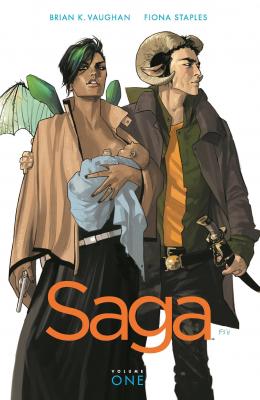 An entertaining space opera romp that reads like a mash up of Star Wars and How I Met Your Mother. The understated artwork by Staples nicely enhances Vaughan's futility of war theme. A 2013 Hugo Award Winner. Be warned that Vaughan has a long history of sucking readers in with sympathetic, well rounded protagonists and then heartlessly slaughtering those characters in the final chapter. In this case, that chapter hasn't been written yet but... — Tom Nucci

Imagine Romeo and Juliet but on an intergalactic level! Saga is a hilarious and exciting adventure series following the lives of Alana and Marko, members of two constantly warring species, on the run with their mixed breed daughter while continuously running into a variety of obstacles, zany new friends, and an army of people out for their blood. — Samantha Beitler