We Told You So: Comics As Art (Hardcover) 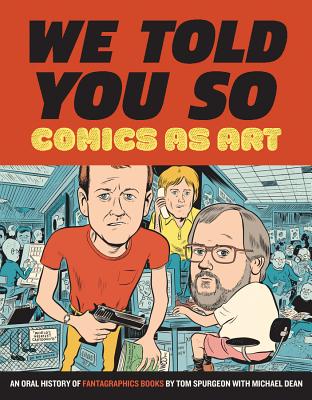 An exploration of Fantagraphic’s role in the movement to accept Comics as an art form. An anecdotal account from some of the leading artists of the past 40 years.

This is an oral history of Fantagraphics, the iconoclastic independent comic book publisher who reshaped the medium so that cartoonists such as Daniel Clowes, Chris Ware, Joe Sacco, and many more could thrive.

In 1976, a group of young men and women coalesced around a fledgling magazine and the idea that comics could be art. In 2016, comics intended for an adult readership are reviewed favorably in the New York Times, enjoy panels devoted to them at Book Expo America, and sell in bookstores comparable to prose efforts of similar weight and intent.

Comics As Art: We Told You So tells of Fantagraphics Books' key role in helping build and shape an art movement around a discredited, ignored and fading expression of Americana the way insiders share the saga with one another other: in anecdotal form, in the words of the people who lived it and saw it happen. Comics historian and critic Tom Spurgeon and longtime Comics Journal editor Michael Dean assemble an all-star cast of industry figures, critics, cartoonists, art objects, curios, and groundbreaking publications to bring you a detailed account of Fantagraphics' first 40 years.

Comics as Art is a detailed catalog of the look of a cultural awakening. It's a story that includes appearances by Chris Ware, Art Spiegelman, Harlan Ellison, Jim Shooter, Stan Lee, Dan Clowes, Frank Miller, Peter Bagge, Jaime Hernandez, Gilbert Hernandez, Dave Sim, Steve Geppi, Todd McFarlane and every other major figure in the arts or business end of modern comics. More than a corporate history or a fond look back, Comics As Art: We Told You So makes the warts-and-all case for Fantagraphics Books' position near the heart of the modern reclamation of the comics art form.

Tom Spurgeon is the co-creator of the award-winning The Comics Reporter, which publishes journalism, criticism, and history, and the co-writer of a Stan Lee biography. He edited The Comics Journal for five years. He currently lives in Ohio, where he is organizing the Cartoon Crossroads Columbus convention.

Michael Dean lives in Seattle, WA. He has been an editor at The Comics Journal since 1999.