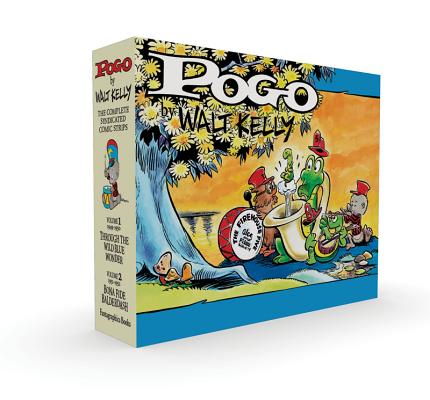 In November of 2011, Fantagraphics released the first volume of its much-anticipated, long-promised series reprinting in its entirety the syndicated run of Walt Kelly’s classic newspaper strip, Pogo. Pogo: Through the Wild Blue Wonder immediately became the company’s best-selling book of the last five years. A year later, simultaneously with the release of the second volume, Pogo: Bona Fide Balderdash, Fantagraphics will also be offering a gift box set containing the first two volumes, complete with a handsome, collectible slipcase (and for $10 less than the cost of the two individual volumes). This box-set initiative has been very warmly received by fans, retailers, and grandparents looking for gift ideas on our Peanuts and Mickey Mouse book series, and we fully expect to further cement the runaway success of this new addition to our burgeoning classics line. The first two volumes collect the first four years of Kelly’s magnificent strip, including the initial three years of Sundays published in full, restored color for the first time in book form! The books also include all the dailies (of course), meticulously retouched by Kelly’s own daughter (who edits the series), historical essays by Pogo historians Steve Thompson and R.C. Harvey and famous-friends-of-Kelly Jimmy Breslin and Stan Freberg, the pre-syndication “Daily Star” iteration of the strip, color guides from Kelly’s own hand, and much, much more.