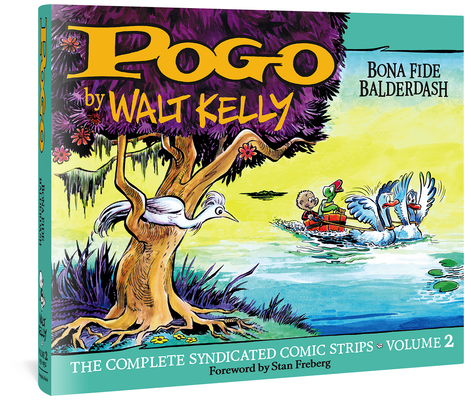 This volume collects the years 1951-1952 dailies of the popular comic strip, with extras such as an introduction by Stan Freberg.

In November of 2011, Fantagraphics released the first volume of its much-anticipated, long-promised series reprinting in its entirety the syndicated run of Walt Kelly’s classic newspaper strip, Pogo. Pogo: Through the Wild Blue Wonder immediately became the company’s best-selling book of the last five years. Exactly one year later, the second volume, Pogo: Bona Fide Balderdash, will be released, featuring all the strips from 1951 and 1952. With sources found for the more elusive strips (in the past, our scheduling downfall), we’re confident that these collections will become an annual affair. Even though Pogo had been in syndication for less than two years as this volume begins, Kelly’s long professional experience (including seven years creating Pogo stories for comic books) had him at the peak of his powers, and this book features page after page of gorgeously drawn, hilarious vaudevillian dialogue and action among the swamp denizens, as well as Kelly’s increasingly sharp-tongued political satire — especially on display during the 1952 election season. Kelly was famous for his prolific creation of recurring characters, and by the end of this second volume, the count will already have topped over one hundred. New arrivals include Tammanany the Tiger, the voluble P.T. Bridgeport, the sinister Sarcophagus MacAbre (with his funereal speech balloons), Uncle Antler the bull moose... and Bewitched, Bothered, and Bemildred, the adorable trio of bats. The two years of daily strips in this volume have been collected before but in now long-out-of print books; and even there they were not as meticulously restored and reproduced as in this new series. Bona Fide Balderdash also reprints, literally for the first time ever in full color, the two full years of Sunday pages, also carefully restored and color-corrected, shot from the finest copies available. This second volume is once again edited and designed by the cartoonist’s daughter, Carolyn Kelly, who is also handling much of the restoration work. It includes a new introduction by the legendary author, recording artist, and satirist Stan Freberg, who was not only a friend of Kelly’s but the voice of Albert the Alligator in the I Go Pogo: Pogo for President movie. There will also be more extensive annotations by comic strip historian and expert R.C. Harvey, as well as additional historical information from writer Mark Evanier.