A World Made New: Beyond COVID-19 to a low-carbon, resilient and inclusive world (Paperback) 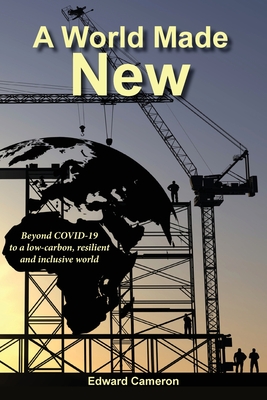 According to her son, Eleanor Roosevelt said the same prayer every night and closed with this wish: "save us from ourselves and show us a vision of a world made new". This prayer reminds us that in the midst of managing crisis we must also keep one eye on the better future we want to create.

COVID-19 is a public health emergency and economic crisis of unparalleled scale. Lives are cut short prematurely, the dreams of small business owners hang in the balance, and unemployment rises to levels unseen in a century or more. It is natural that we want this nightmare to end and that we yearn for a return to normal. But normal wasn't working. The economy of December 2019 created wealth for a privileged few while leaving millions to suffer from chronic hunger. Long before the acute shock of coronavirus we were charging headlong into climate crisis.

In "A World Made New" Dr Edward Cameron asks us to resist the temptation to re-establish a pattern of environmental destruction, social injustice and economic inequality and instead "reinvent" - turn this moment of crisis into an opportunity to build a 21st century economy and society - one that is low-carbon, resilient and inclusive. He offers design principles and practical recommendations to shape the unprecedented rescue packages that will inject tens of trillions of dollars into the economy over the coming 24 months.

This book is a must read for anyone who wants to understand the full impact of COVID and is yearning for ideas on how to build a world made new.

Dr. Edward Cameron has spent 23 years working on climate change, development, and human rights. Born in Ireland, and the youngest of five children, Edward studied political science and history at University College Dublin. After graduation, he moved to Belgium to pursue a Master of Arts in European Studies in the hope of building a career at the heart of the European Union (EU) in Brussels. Edward spent nine years working on EU environment, enlargement, regional, and research policy before deciding to pursue doctoral research on climate justice. In 2007, Edward co-designed the first state-led initiative on human rights and climate change while working at the Ministry of Foreign Affairs for the government of the Maldives. This resulted in the first UN Human Rights Council Resolutions addressing how climate change undermines the realization of human rights and the adoption of human rights provisions into the UN climate convention. This work, coupled with his ongoing doctoral research, made Edward one of the early pioneers of the climate justice movement. He went on to spend six years in Washington DC representing the Maldives, serving at the Social Development Department of the World Bank, and as Director of International Climate at the World Resources Institute. In 2013, Edward moved to New York to join Business for Social Responsibility (BSR) and spent the following five years working with a network of more than 300 companies to reduce greenhouse gas emissions and enhance resilience to climate impacts within the private sector. He helped to create the We Mean Business coalition, serving as policy engagement director for four years, and amplifying the voice of progressive business in shaping what became the Paris Agreement. Since 2017, Edward has worked as an independent consultant, advising governments, companies, international organizations, philanthropies, nonprofits, and universities. He lives in Manchester, Vermont with his wife Carina and two sons Robert and James. For more information visit www.cameronclimate.com

“This is an extraordinary synthesis of good ideas for responding to the linked public health and climate emergencies societies now face. Cameron grounds prescriptions for action with a deep concern for social equity and justice, and he is totally convincing that a return to the old status quo is unworthy of us. Unlike much of the writing on these subjects, the book reflects extensive and helpful awareness of what is going on internationally.” —James Gustave Speth, author of America the Possible: Manifesto for a New Economy