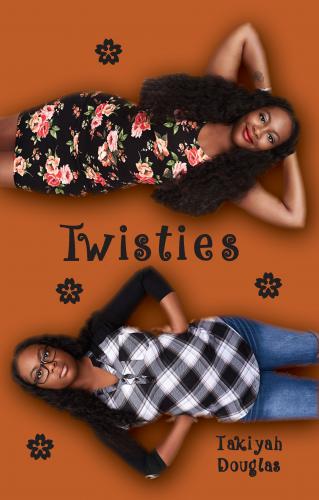 By Takiyah Douglas
$19.99
Click Title for IN STOCK Location

Teenagers Tara and Tatiana Wynne are twins living in the infamous Southern Gardens area. Despite being rampant with poverty, organized crime, and the threat of gentrification, the two have called it home ever since their mother became an addict. Despite their mother’s issues, Tara wants to live the fast life with Deon, a notorious drug lord who reigns over the area. On the other hand, socially awkward Tatiana’s dislike for people and passive aggressive nature tends to result in some tricky situations. None of that compares to her ongoing complicated relationship with her boyfriend. But when Tara’s lifestyle starts spilling into Tatiana’s world, a strain is put on the sister’s relationship. Still, Tatiana is determined to help her. Can Tara be pulled away from it all or will it be too late?

Takiyah Douglas is a Springfield, MA native who dreams of improving her community through her writing. She has high hopes of being able to make a living off of her creativity and her goals range from becoming a New York Times Best Seller author to buying a forest. In her spare time, she fantasizes about her book becoming a Netflix series and making Amazon lists of things she’s most likely not going to buy. She also has an extreme love for the musical artist Joji and is dying for his next album to come out. You can find her on a sectional or love sac creating pieces rich in satire, humor, and pop culture.