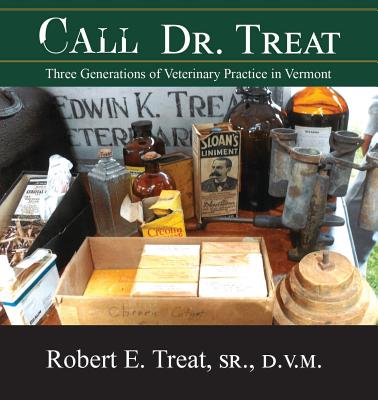 Call Dr. Treat details the development of three generations of veterinary practice and medicine in Manchester Center, Vermont. The practice started with Edwin Treat, and then continued with his son Robert and now his grandson Robert, Jr. Starting with the details of the humble beginnings of veterinary medicine and chronicling the advancement throughout 80 years. Dr. Treat tells his story in laymen's terms and with a sense of humor all while showing his family's dedication to the betterment of all animals.

Born in Bennington, Vermont, August 5, 1937, Dr. Treat grew up with his parents and sister on a forty-acre farm in Manchester, Vermont. At an early age, he exhibited an interest in animals. At the age of four, while taking naps in the car, he started riding on calls with his father, Dr. Edwin Treat, a veterinarian. He attended Manchester public school and later Burr and Burton Seminary (now Burr and Burton Academy). The family had horses, cows, dogs, and cats. Having had a great deal of exposure to a variety of animals, he became interested in farming and caring for pets. He started milking the cow by hand in eighth grade. Through high school he milked his own cow, raised calves, and worked in his father's veterinary hospital. There he had small jobs such as filling the kerosene heater for the "hospital," sharpening needles, and holding animals for treatment. He attended Franklin and Marshall College in Lancaster, PA and then Cornell Veterinary College, at Cornell University in Ithaca, NY. Upon graduation from veterinary college, he interned at Rowley Memorial Animal Hospital in Springfield, MA for 14 months. Dr. Treat returned to Manchester in August of 1963 to work with his father. They worked together until his father retired in the 1980's. Dr. Treat then worked with his son, Dr. Robert E. Treat, Jr., until Dr. Treat retired in 2008. He had first hand exposure to dairy cows and draft horses. He witnessed the replacement of draft horses by the tractor and the subsequent increase in pleasure horses. During the 1950's he observed the loss of the small Vermont family farm, the opening up of land, the subsequent introduction of the second home industry. The latter coincided with the development of the ski industry. These changes initiated the increase in the small animal population and the demand for their care. Less emphasis was placed on large animal medicine and surgery, and more was placed on small animal medicine and surgery. Dr. Treat resides in Manchester where he enjoys his family. His hobbies include reading history, working with Boy Scouts, participating in outdoor activities and community organizations. ​

Our families had the unusual experience of a three-generational relationship. We have known Bob all our lives. His technical explanations in the three-generational veterinary practice is eye opening. Using a series of anecdotes and historical facts, he takes us through a 80-year journey in veterinary medicine. His travels with his father, and later working with his son, depict the intricacies that have brought veterinary practice into today’s modern world. I could not have asked for a better friend or veterinarian. —Timothy Bryant and his wife Nancy Bryant, local farmer and former chairman of the New England Dairy Promotion Board

Our Vermont idyllic, picture postcard landscape is a by-product of two and a half centuries of agriculture. Dr. Treat has been intimately connected to our agricultural history for the last eight decades, starting as a four-year youngster riding with his dad in the early forties. Agriculture has changed from milking a few cows by hand daily to milking hundreds of cows daily in agribusinesses. Dr. Treat, in laymen’s terms, and with a sense of humor, has skillfully taken us on that journey. —David Quesnel, author of GrandPAW’s Memoirs, Growing Up On A Dirt Road

This book details the development of a three-generational family practice of veterinary medicine in Manchester, Vermont. The practice started with the grandfather, Edwin Treat, and then continued with his son Robert and now his grandson Robert, Jr. It details the humble beginnings of veterinary medicine and chronicles the advancement throughout the 80 years. Furthermore, it shows a family’s dedication to the betterment of all animals and is an excellent read. —Joseph M. Stoyak, VMD and his wife, Michele Stoyak, Chief of Surgery, Rowley Memorial Animal Hospital, Springfield, MA​