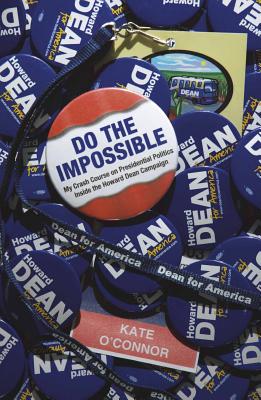 What do you think about me running for president?

Some people laughed, many were skeptical, and still others were indifferent when Howard Dean floated the idea in 2000. But just three years late, the onetime Vermont governor — drawing record crowds and contributions — was poised to win the Democratic nomination.

Written by a longtime aide, this book offers an insider’s view of the unlikely juggernaut that captivated grassroots voters and confounded the political establishment. Starting with the bid’s humble beginnings, the day-to-day account chronicles both the highs and lows as Dean and his staffers learn how to deal with the press, other politicians, and the double-edged nature of popularity.

Do The Impossible: My Crash Course On Presidential Politics Inside The Howard Dean Campaign is a revealing read for anyone who followed Dean for America or just wants to know what really happens inside a presidential campaign.

Harry Truman would be proud of both Howard Dean and Kate O'Connor's narrative of how the Dean campaign forced the milktoast Democratic establishment of 2003 to fight back rather than roll over - and this Eisenhower Republican is proud of both of them too !