Chasing the Lion: An Unresolved Journey Through the Phillips Exeter Academy (Paperback) 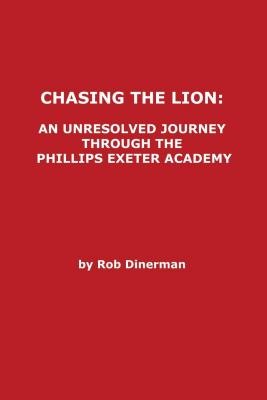 Chasing The Lion is a memoir that chronicles, depicts and comments upon the author's experience of life at a high-end New England prep school during the late 1960's and early 1970's, and the undulating relationship he forms with the school during the decades following his graduation. Dinerman explores the effect those years had and continue to have both upon himself and his classmates, a number of whom showed clear signs during those high-school years of the high-profile careers that awaited them. Prep schools in general, and his prep school (the Phillips Exeter Academy in southern New Hampshire) in particular, underwent momentous changes during that time period, and the author's experience is examined within the context of his complex personal relationships, the stress of school work and the college application process, raging campus politics and the maelstrom of the prep-school bubble.

Among the captivating episodes are a fistfight that erupted in class one morning between a veteran faculty member and a militant student; the crossing of a boundary line in a vain attempt to survive a try-out for a sports team; a bid for a coveted newspaper position in the face of a stacked deck; a tumultuous graduation; and several highly charged encounters with school administration figures in subsequent years. These events, along with the more anonymous moments which have lasting ramifications as well, are recounted with vivid detail through the prism of the book's protagonist in a manner that will resonate with anyone who has experienced prep-school or Ivy League life or is contemplating doing so.