Seeing Seeds: A Journey into the World of Seedheads, Pods, and Fruit (Seeing Series) (Hardcover) 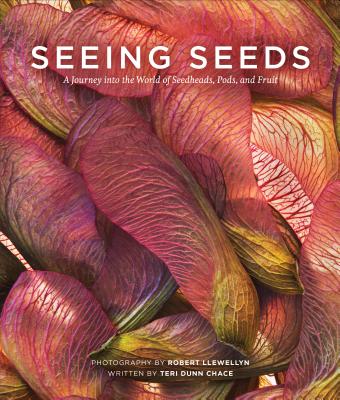 “Llewellyn’s images reflect a depth of detail that until now, only the best botanical illustrators could approach.” —The Washington Post

A centuries-old saying goes, “Great oaks from little acorns grow.” But as this dazzling book reveals, there is much more to a seed than the plant it will someday become: seeds, seedheads, pods, and fruits have their own astounding beauty that rivals, and sometimes even surpasses, the beauty of flowers. Bitter melon seeds resemble a handful of rubies. Poppy pods could be art nouveau salt shakers. And butterfly vine seeds look exactly like those delicate insects captured in mid-flight.

Seeds also come with fascinating stories. Jewels of Opar got its name from a fabled city in Edgar Rice Burroughs’s Tarzan stories. Lotus seeds sent into orbit by Chinese scientists came back to earth mysteriously altered. And fava beans—beloved of foodies—have a Jekyll-and-Hyde personality: they can cause the debilitating condition known as favism in some individuals and at the same time combat the microorganism that causes malaria.

In these stunning pages you’ll gain an understanding of how seeds are formed and dispersed, why they look the way they do, and how they fit into the environment. Seeing Seeds will take you to strange and wonderful places. When you return, it’s safe to say that you’ll never look at a seed the same way again.

Teri Dunn Chace is a writer and editor with more than thirty-five book in publication. She has also written and edited extensively for Horticulture, North American Gardener, Backyard Living, and Birds and Blooms. Raised in California and educated at Bard College in New York, Chace has gardened in a variety of climate zones and soil types.

Robert Llewellyn’s photographs have been featured in major art exhibits, and more than thirty books currently in print. His book, Empires of the Forest: Jamestown and the Beginning of America, won five national awards in nonfiction and photography, and Washington: The Capital was an official diplomatic gift of the White House and State Department.

“Both exquisitely beautiful as well as informative. . . . Reading this book will leave the reader with a greatly enhanced knowledge and appreciation of plants and their lives, as well as a sense of wonderment at so much natural beauty in unexpected places.” —Gardens Illustrated

“Seek out the Seeing series, and prepare for your breath to be taken away.” —NYBG’s Plant Talk

“Amazing array of spectacular photographs, many shot at unusual angles that underline their ability to, sometimes, outshine the flower that produced them.” —Hortus

“This is an odyssey full of wonder that’s worthy of narration by Jacques Cousteau. . . . So often we look, but we don’t see. This book tries to change all that. Marvel at nature’s symmetry, patterns and hidden textures.” —The English Garden

“Magical encapsulations of the future, seeds also are tiny worlds of their own. The new book, Seeing Seeds, explores them in near microscopic detail.” —Sunset

“A marvelously artistic and detailed look at how plants perpetuate themselves. . . . The energy and ingenuity of seeds practically jumps off the pages of the book.” —Pacific NW Magazine

“What Llewellyn has done with his photographs is something akin to entering the temple of creation on a microscopic level.” —The Daily Progress

“Revel in the splendor of the plant world with Seeing Seeds.” —Rodale’s Organic Life

“A breathtaking photographic journey into the world of seedheads, pods and fruit.” —Alpine Garden Society Journal

“The macro images show well-known plants like poppies and cattails in a newly glamorous, occasionally otherworldly light. This is the equivalent of an Annie Leibovitz fashion shoot for plants.” —mental_floss