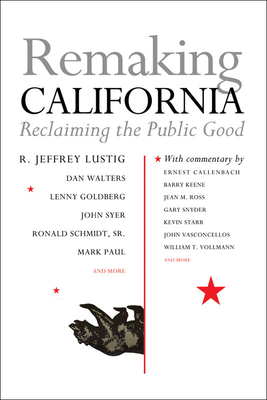 California is locked in a constitutional crisis. Its schools are in decline, its water system near collapse, and its prisons in disarray. It is unable to avoid a yearly budget crisis, maintain its public facilities, or care for its sick. Nor can its citizens remedy these ills under present arrangements. A land once known for its beauty and abundance is now characterized by abandoned properties and a shortage of homes, jobs, and opportunities. In Remaking California: Reclaiming the Public Good, leading writers and scholars probe the roots of this crisis, trace its effects on people's lives and the environment, and propose reforms to remedy problems and restore the state's democratic promise. They conclude that only a systemic overhaul will shake California out of its paralysis, and they debate the promise and pitfalls of a new constitutional convention for remaking the Golden State. Contributors include Dan Walters, Lenny Goldberg, Kevin Starr, Mark Paul, former Senator Barry Keene, and many more.

Remaking California is timely and urgent. This lucid, forceful analysis is essential reading for all Californians.